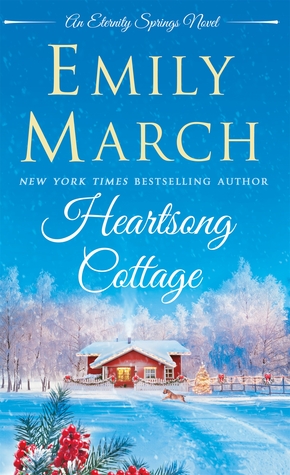 Daniel Garrett is no stranger to heartache or tragedy. Once a successful detective, his world fell apart with his son’s murder and his wife’s suicide. Leaving the police force, Daniel devotes his life to finding missing children, but when a case goes sour on the anniversary of his personal tragedy, he returns to Eternity Springs hoping for some of the town’s fabled healing.

Shannon O’Toole isn’t looking for romance. After her fiancé’s death, she closed off her heart. But she can’t deny the spark between her and a sexy stranger at a friend’s wedding. Shannon has her own secrets and has no place in her life for a private detective, even one who moves her as much as Daniel. But when the pair are thrown together on a case, the magic of Eternity Springs just might give them a second chance.

Read on for my thoughts on Heartsong Cottage.  No true spoilers, promise.

Let me say this up front – it is going to be a miracle if I can complete this review without giving away any spoilers – which I try not to do, ever.  But it’s going to be difficult because this is such an emotional story with valid reasons as to why Daniel and Shannon act in the way that they do.

Shannon has secrets.  Huge secrets, the kind that have her leaving town in the middle of the night – the kind that has two suitcases, one summer the other winter, for when she has to run – now.  It’s not the kind of life that leads to settling down in one town forever,  nor the kind that would allow a special man into her life to share in its dangers.

But here in Eternity Springs she’s building a new life.  One that includes friends, and plans for more than a week at a time.  She wants so desperately to simply settle down and live.  But she will always be looking over her shoulder.

At one time Daniel hat it all – the perfect job for him, the loving wife and rambunctious son at home, even the silly puppy who chased squirrels.  All it took was for one evil man to change everything.  A moment for that life to be stolen from him forever.  Now he’s left the police force and gone private.  Now he searches for missing children in the hopes of giving their grieving parents something he will never find… peace at last.

On this trip to a friend’s wedding in Eternity Springs, Daniel’s life is about to change.  Oh, it’s not going to be easy.  It’s going to be painful.  But at the end of the road lies a happiness that he thought to never experience again.  He just has to slay a few dragons and win the damsel – he can do that, if he can fight off his own demons along the way.

Heartsong Cottage is such an emotional gripping story.  A small town where people know their neighbors, a place where miracles are said to happen, maybe even a place to heal.  The attraction between Daniel and Shannon is immediate and strong.  Yet they both have major baggage from their pasts and it’s going to be an uphill battle for them to get to that happy ever after that they so richly deserve.

If you are looking for a story that will give you a solid storyline, believable characters as familiar as your neighbor down the street, the satisfaction of seeing two wounded  people find peace and love after a long, long journey – then Heartsong Cottage is a novel that you are going to want to pick up.

This was my first trip to Eternity Springs.  Now that I’ve had a taste of this charming town and it’s intriguing and entertain citizens I’m heading out to start from the very beginning.  I would highly recommend this story and wish you happy reading as you fall in love with Eternity Springs.

*I received an e-ARC of Heartsong Cottage from the publisher and NetGalley in exchange for an honest review. That does not change what I think of this novel.*