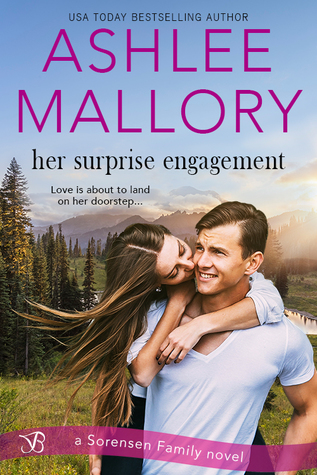 Single mom Daisy Sorensen doesn’t believe in fairy tale endings—at least not for her. All she wants is to enjoy a much-needed, stress-free family vacation at a friend’s Lake Tahoe home. So of course everything that can go wrong does. Including a gorgeous man and his daughter showing up in the middle of the night.

Soon-to-be Governor Jack Harrison has had a crazy week, but he’s sure nothing can top arriving to find a bathrobe-clad, beautiful stranger in the home he’s staying in for the week. He’s wrong. When things spiral out of control the next morning, Jack makes Daisy an offer she can’t refuse. She’ll pretend to be his fiancée and he’ll help her open the bakery she’s been dreaming about.

But in between late-night campfires and days on the lake, Jack finds himself falling for the strong, stubborn woman for real.

Titles in The Sorensen Family include:  Her Backup Boyfriend – Her Accidental Husband – The Playboy’s Proposal = Her Surprise Engagement

Two families, one vacation house, a mix up in communication on the availability of that house and one politically damaging situation equals the need for some fast thinking and a possible solution for two strangers.  Daisy just wanted to get her three kids and her aunt to the vacation her sister-in-law had offered them at Lake Tahoe.  A poor substitute for Disneyland, but then it’s just one more time that their father, her ex, had let them all down for his own selfish reasons.  Her van dying on the way hadn’t helped matters any.  Now all she wants is a soak in a tub and a bed to fall into.  Jack was thankful that a friend of the family had offered her family’s vacation home for his and his daughter’s use over the coming holiday week.  As Lieutenant Governor, Jack was certainly used to politics, and now it seemed that he might have that shot at Governor sooner than next election if things worked out.  But this was his time with Lily, a chance to ease her into understanding what was coming next for them.  He expected an empty house.  What he found was an opened wine bottle on the kitchen counter, and a lovely sleepy woman in a very old bathrobe instead.  Add into that mix a reporter and camera crew at the front door and some innocent children’s comments – and you have a political mess to clean up, fast.

Her Surprise Engagement starts off with a chuckle, a bit of attraction and two adorable families…. oh, and a fake engagement.  I had fun with this story.  Daisy is still recovering emotionally from her ex-husband’s actions.  She’s strong, stubborn and unlikely to accept help from anyone.  So when Jack proposes a business deal in exchange to pretending to be engaged for a short time she reluctantly gives in.  And over the course of a few days two families seem to slowly merge into one group.  It would be easy to think that this can be forever.  But Daisy knows full well that fairy tales are a pretty story and nothing more.  Jack’s need to help and Daisy’s determination to not accept help are at the center of their troubles.  The issues they faced, the pressure and the feeling of belonging that they bring out makes this an emotional romance where you will be fully engaged in the outcome for this couple.  I would definitely recommend this story, and the entire series to any Romance reader who enjoys strong stories, believable couples and interesting secondary characters.