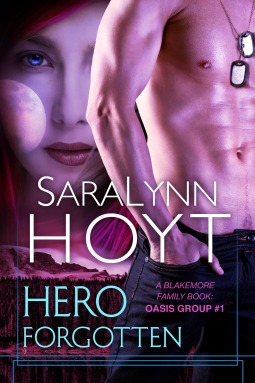 Abigail Blakemore is a descendant of talented female mediums and is one of the best in her own right. Law enforcement from all over the Seattle area seek her out to help with their toughest cases. But hiding at home and conducting most of her business via the internet is no way to meet men. But a new ghost who has entered her life is about to change all that.

Kent Caruso, ex-Special Forces, now a highly skilled hacker at a Seattle dotcom, can’t forgive himself for his wife’s accidental death while he was deployed in Afghanistan nearly two years ago. Interested in the supernatural for years, he finds himself wandering into a little occult shop on Valentine’s Day and smack into the sexiest palm reader in Seattle.

The first book in the Oasis Group series starts with a fast, hot romance between Abby and Kent that has a little help from cousin Marty and one of his not quite perfect elixirs. What will the side effects be and will Kent and Abby’s love be strong enough to prevail over the powerful Blakemore legacy?

Only cousin Jake Blakemore, CEO of the Blakemore Oasis Group—a prestigious private security firm of highly skilled operatives—knows how deep those male dominated Blakemore secrets go and he won’t share much of his knowledge with Abby. But he assures his cousin that if hers and Kent’s feelings are true than in the end, nothing can stand in the way of their happiness.

Being a medium isn’t all that glamorous or exciting.  Constantly hearing voices.  People thinking you’re wacky when you try to give them a message from a recently departed loved one.  And now this!  To be wakened from the most sinfully delicious sexual encounter of a lifetime, even if it was only a dream, by a pesky ghost was most annoying.  But this is what Abby does, talk to the dead and help people move on – and that is this ghost’s request to help her husband stop grieving, he couldn’t have saved her from death, and to just move on and find happiness.

Kent’s guilt at re-enlisting and being in Afghanistan when his wife was killed in an accident never lets him go for a moment.  Today, on what would have been his wedding anniversary he’s drawn to a small shop, to a medium who is actually more than a bit oddball and discovers a message awaiting him. This casual visit to an occult shop seems to set off some very strange and sexy happenings – along with another mystery to unravel.

Hero Forgotten is one supercharged sexy read – it’s funny, quirky, certainly sexy and simply an entertaining way to spend an evening.  It’s short, very short so you’ll have time for a fast read.

I liked it, I had fun with it and Hero Forgotten has captured my imagination for the rest of the series to come… and I’ll have to go back and check out the beginnings of the Blakemore family as well.

This story was originally included in an anthology and has been revised into this first story of the series.  My only wish is that it had been fleshed out a bit more – sex is awesome, don’t get me wrong… but I would have liked a bit more of our hero and heroine outside of the sexual tensions.  But, as always, that’s just my thought and we have the story that the author intended for us to have.  I sometimes cannot help for a wish list though.

**Note: Formerly ‘Love Potion #9’ published under author’s real name, Sheryl Hoyt as a short story in a Valentine’s Day Anthology, this book begged to be rewritten, added on to and expanded into a series. With its new title, Hero Forgotten is the first book of this contemporary series, by SaraLynn Hoyt. The Blakemore family was first introduced by SaraLynn Hoyt in Heaven Made, a Madame Lou historical book.**

*I received an e-ARC of Hero Forgotten from the publisher and NetGalley in exchange for an honest review. That does not change what I think of this novel.*

« Shift by Sidney Bristol
Her Forever Hero by Melody Anne »