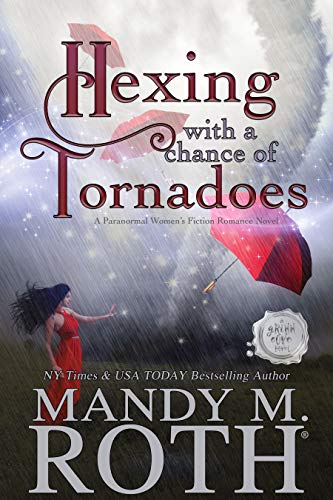 Returning to Grimm Cove for Hexing with a Chance of Tornadoes, Dana’s, and Jeffrey’s story, was an absolute delight.  To say I’m loving the Paranormal Women’s Fiction genre is an understatement, and this series is one of the main reasons for that enjoyment.

I enjoyed the little bit of background of Dana and her Nonna we get at first while she was still in New York, it helped solidify and maybe explain their relationship – and perhaps set us up for what will come later.  So, yeah, I adored Wilma (Nonna) and would want her on my side in any fight ‘cos she’s dangerous in a unique way.

Dana is… well, stubborn is really too soft of a word for this power lady.  She knows what she wants and isn’t afraid to kick butt and take names in order to get it.  Yet, in Hexing with a Chance of Tornadoes we get to see the depth and layers of Dana emerge as her life is about to get crazy and intriguing.

Jeffrey is the local bar owner, the Alpha of the town’s wolf pack, and very much at ease with the fact he hasn’t yet found his mate.  Not happy, but not obsessing about it either.  With the arrival of his best friend’s mate along with her friends and the troubles they’ve stirred up, his life has gotten a lot more active.  There’s just something about Dana that draws him, even though she’ll shoot down any flirt he tosses out with ease, he just won’t or can’t give up trying.  Jeffrey and Dana are about to find out why they are drawn together right in the middle of one dangerous, evil storm of trouble brewing in Grimm Cove.

While I don’t give out plot details I will say that this one kept me glued to my Kindle throughout.  There are twists and turns, I expect those.  But there are also some major surprises as well.  So I was kept a bit off-kilter during this story and that only added to the enjoyment factor.  Poppy, Dana, and Marcy are really starting to come into their own in this story – and Marcy’s is probably going to be an explosion of awesomeness because she is such a unique character.  I had a blast with Hexing with at Chance of Tornadoes.  I got annoyed at characters, belly laughed (maybe even snort-giggled), was held tightly in this world until the very ending.

If you love a good Paranormal with some romance tossed in, unique characters and a story to keep you fully engaged, then you’ll want to pick up this story and series very soon… like right now.

« My Kind of Cowboy by R. C. Ryan
Haunted And Hexed by Misty Bane »