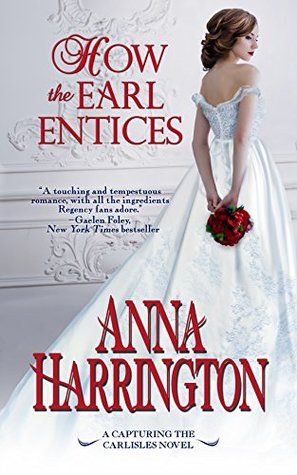 If you’ve read any of the books in the Capturing the Carlisles series then you’re sure to love How the Earl Entices.  If not, then this one “could” be read as a stand-alone novel for Ross is a cousin to the brothers – yet, this entire series is excellently written with compelling plots and believable, likable heroes and heroines that I believe you’ll be hooked and want to go back to the beginning.  Having said that, I don’t feel I can say much more about this particular story plot-wise for that would give away far too many spoilers, so you’ll have to make your decision based on the cover description blurb, at least from this reader.

What I can say is that Ross is such an honorable, dedicated to his country, and extremely stubborn man that he is pretty much the ideal hero for a Regency Romance.  Combine that with a handsome face, a bit of humor, and swoon-worthy steamy encounters and you’ll fall a bit in love with this man.  Grace is… strong is the best word, she’s intelligent, dedicated, not above a touch of blackmail for the benefit of her son… but she is so strong to have faced what has happened and come out the other side without losing her sense of humor, her ability to love and a fierce protectiveness.  Grace is a woman you’d want for a friend, on your side in any fight and someone easily admired for herself.  Together they simply worked, each countering the other’s weakness and strengths as well as an intense, sensuous feel to them as a couple.  I liked them both, and I believe you will as well.

You’ll find danger, treason, a bit of a mystery to solve and a story that will capture your attention from opening page through to the very satisfying ending.  I loved every moment spent in this world once again and would not hesitate to recommend How the Earl Entices to any Historical or Regency Romance reader.