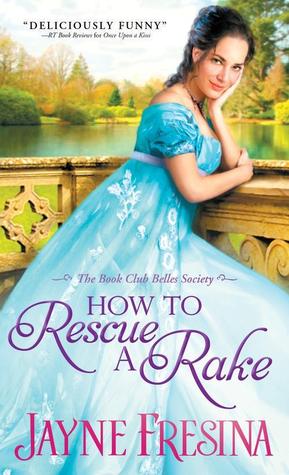 Nathaniel Sherringham has returned to Hawcombe Prior a changed man. Gone is the reckless rake who went out on a limb to propose to Diana Makepiece three years ago. Now Nate’s mysterious new wealth has the town’s rumor mill spinning. To stir things up (and get Diana’s attention), Nate boldly announces his plans to marry “any suitable girl” under the age of 25.

Diana, now 27 and still single, is acutely aware of Nate’s return. When her mother suggests a trip to visit a cousin in Bath, Diana leaps at the chance to escape the heartbreak and regret she can’t help but feel in Nate’s presence…and avoid his irritating charade to find a bride.

But for Nate, Diana has always been the one. He might just have to follow her to Bath and once again lay his heart on the line to win her attention-and her heart.

Read on for my thoughts on How To Rescue A Rake.  No true spoilers, promise.

Diana is a child of her times.  She follows the rules, she listens to her overbearing, overly strict mother even when it’s the last thing she should have done.  Nathaniel is a rake through and through – right up until the moment he realized that Diana was the one woman for him.  He proposed, perhaps foolishly considering his reputation, and has his heart broken at Diana’s refusal and her scathing words (taken directly from her mother’s influence).  Even in the pain of rejection, Nate does realize some truths in Diana’s words – and sets out to make some changes.

Almost three years after Dina’s rejection Nate has returned to her home town. a far different man from the rake the town and Diana had known.  Now a wealthy man, Nate has never forgotten his love and perhaps to stir things up makes an outrageous declaration to the town – and their eligible misses.  In spite of her answer, Diana has always cared for Nate and to watch the ladies fawn over him in order to be considered for the position of his bride was simply too much.  When an escape to Bath was offered Diana gratefully took it never realizing that the time away from her mother’s influence would change her life.  Nate is also headed for Bath, and with determination and charm intends to win over the woman he loves.

As the ladies of the Book Club Belle Society take up Jane Austen’s newest novel, Persuasion, they never thought that the events in the life of one of their own would be running an almost parallel course in the pursuit of love.

I have enjoyed all of the stories in this series, and it was delightful to see Nate and Diana finally get their happy ever after ending – even if it took years and a lot of changes for them both.  It was heartwarming to watch Diana grow into a smart, lovely woman.  Beyond the influence of her mother, once she began to think for herself as to what was right for her and not society’s rules she became free to truly love Nate for exactly what he was – the man who loved her back.  Often times with a smile or chuckle, sometimes with a bit of vision blurred because of tears, always with a sense of these two belonged together if only they would just take the risk (looking at you Diana).  How To Rescue A Rake is a fun, charming and satisfying story that will capture your heart.

*I received an e-ARC of How To Rescue A Rake from the publisher, Sourcebooks Casablanca and NetGalley in exchange for an honest review.  That does not change what I think of this novel.*