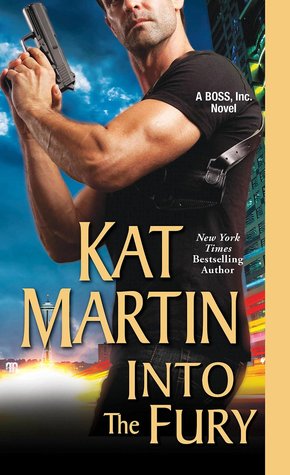 A bodyguard, a bounty hunter, a P.I.—the men of Brodie Operations Security Service, Inc. are down for the job…

Sinners, whores, and sluts beware—your time is at hand: a faceless menace is threatening lingerie models on a cross country tour, and Ethan Brodie is there to defend and protect.

Ethan’s learned the hard way that beauty is no substitute for character. So even though Valentine Hart is one of the most breathtaking women he’s ever seen, he’s keeping his hands off and his eyes open. Or that’s what he tells himself.

Then one of the models is murdered, and the closer Ethan gets to the answers, the closer he finds himself to Valentine—and the hotter the pressure feels. There’s more to Val—more to the other girls—than he could have guessed. But one is keeping a secret that could kill them all.

Read on for m y thoughts on Into The Fury.  No true spoilers, promise.

Ethan had one girl – his daughter, and that was as many as he needed on a permanent basis in his life.  Companionship, now that’s a whole different thing but no one is getting any where near his heart again.  Been there, got the torn t-shirt and the broken mug and the constant annoyance to last a life time.

Val never dreamed of walking the runway.  She had her heart set on becoming a veterinarian and was so close to accomplishing that goal.  This lingerie gig was the money ticket to her dreams becoming a reality.    When her contract was done, so was she.  That had been the plan before a madman began threatening the models and Ethan showed up as bodyguard and investigator.

I enjoyed Into The Fury, and expected the world building that the first story in a series involves.  The side romance story with Megan and Dirk is a nice segue into the next story in this series.

Watching Ethan’s walls fall was a fun time for me – I love an alpha male with attitude and strength, but I also enjoy watching them fall for their lady, that never grows old for me.  Valerie is such an open book, she’s smart, sexy and beautiful, inside and out.  Ethan may have thought she was nothing but a looker at first, that impression soon was shattered to bits.

As the threats escalate and a model is murdered, Ethan will stick even closer to Val – by strict interpretation of the contract they should have a hands off relationship… but contracts are made to be broken.  Val and Ethan may have a hot as sin need for each other, but the emotions are just as strong and deep.  And the race to find a killer also becomes a race into the love of a lifetime.

Love solid, interesting suspense fulled romance?  Then Into The Fury would be perfect for you.  I’d definitely recommend this one, and will soon start on the next in series.

*I received an e-ARC of Into The Fury from the publisher, Kensington Books – Zebra and NetGalley in exchange for an honest review. That does not change what I think of this novel.*