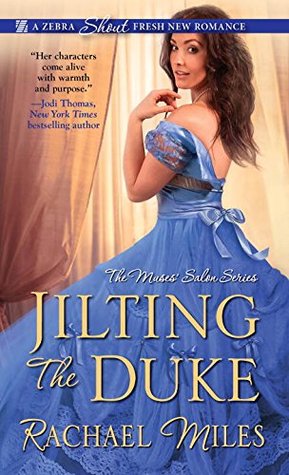 Sophia does not expect Aidan to understand or forgive her. But she cannot allow him to stay her enemy. She’s prepared for coldness, even vengeance—but not for the return of the heedless lust she and Aidan tumbled into ten years ago. She knows the risks of succumbing to this dangerous desire. Still, with Aidan so near, it’s impossible not to dream about a second chance.

Read on for my thoughts on Jilting The Duke.  No true spoilers, promise.

Sometimes a reader needs a fresh new voice in their favorite genre to have their eyes reopened as to why they loved it in the first place.  Jilting The Duke is Rachael Miles debut – and if this is how she’s starting I cannot wait to read what is yet to come.

With a tale of a certainly not young miss and her first throes of affection (although our couple did start that way long ago), we are given the story of the sacrifices that love will make, even with it hurts like nothing else.  To learn, and acknowledge, that there is more than one type of love in the world of relationships – and that’s not a bad thing under most circumstances.

Secrets and subterfuge and not a little poking at what should be obvious to anyone, Ms Miles has delivered a story that will keep readers engaged, searching for clues throughout the journey and the satisfaction of love conquering the worst we can believe of a loved one to finding the truth.  The little details have once again brought the Regency Age alive to me, and for that I must give the author my thanks.

Aidan and Sophia were young lovers before he went away.  As certainly not the heir to his father’s position as Duke (a completely poor Duke at that), Aidan made the decision that the army would be his way in the world.  His love for Sophia was strong, and if they jumped the gun a bit, they were secretly engaged so no one would ever be the wiser… after all they would be married upon his return.

Except life often doesn’t work out like we planned.  Weeks after Aidan left she married another man and moved to Italy.  Her life was good, she drew the plants illustrations for her husband’s work as a botanist and if the headstrong love that she had with Aidan was missing, if there were secrets piled upon secrets in her marriage – well, at least she had her son, Ian.

When her husband, Tom, died it was eventually revealed to her through a letter that her husband wished for her to return to England and raise their son in their home land.  Even more concerning was his request that Aidan become her son’s co-guardian, overseeing his education and growth as a gentleman under both of their watchful eyes.  This was perhaps the last thing Sophia wanted to do, but she heeded her deceased husband’s request.

A lot can change for a man over a decade.  Now Aidan was the Duke, after the deaths of his father and brothers.  The absolute last position he ever expected to be in.  His work in the army has trained him well in all manner of secrets and how to ferret them out.  His heartbreak (if he would admit to that feeling) at Sophia’s betrayal of marrying another man has had a long time to grow and fester within him.  Now that she has returned home, he is plotting the perfect revenge.

He didn’t count on still loving her.  Or the secrets that they all carried.

I was so involved in Jilting The Duke.  An enjoyable mystery, secrets galore, a couple who obviously loved each other still, one obvious secret that somehow the great spy missed (grin) – and the small details to attention that take a story from good to amazing.  All that await you when you decide to pick up this very good, solid, engaging debut story by Rachael Miles.  Definitely recommend this one, go on take the risk on a new to you author, I’m betting you’ll be pleasantly surprised.

*I received an e-ARC of Jilting The Duke from the publisher, Zebra Shout and NetGalley in exchange for an honest review. That does not change what I think of this novel.*