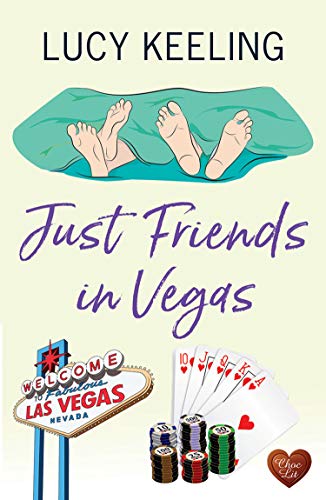 Just Friends in Vegas is the third title in the Friends series – and I, like every other reader who has devoured this series, have been waiting for Mya’s story… and it was well worth the wait!  Talk about smoldering sexy tensions between two people who aren’t quite as immune to each other as they’ve led their friends to believe.

We’ve never known exactly what Mya does on her “work trips” – oh, there were hints (kinda), and suspicions galore but now we get to see exactly what Mya does – and she does it with a flair that is purely Mya style.  No, I’m not giving that away, you’ll have to dive into Just Friends in Vegas yourself for all the juicy details.  Although, it turns out that I was closer than I thought in my guesses.

I adored Smithy, oh he had some growing to do, and they needed some conversations – but I liked the way this couple grew individually (and eventually as a couple) from the before Vegas to the during Vegas time.  If you’ve never had the fun of visiting Las Vegas you can do so through Mya and Smithy’s experiences.  It’s a city that is grandiose on one hand and down to earth on the other, so many worlds cross and mingle here that I never get tired of discovering something new with each visit.

Just Friends in Vegas is a funny, seductive, laugh-out-loud experience that you won’t want to miss.  We get brief glimpses of past couples, discover Mya’s secret, and watch two people who have been skirting around each other for so long finally acknowledge that those sparks actually mean something beyond one moment in time.  I had fun here – and I’m definitely being careful to not give too much away.  You don’t “have” to have read the earlier books, they’d add another level of enjoyment but Smithy and Mya deliver a fun, sexy adventure that can stand on its own.  You should check it out as soon as possible so you don’t miss a thing that happened in Vegas.

*I received an e-ARC of this novel from the publisher, ChocLit/Ruby Fiction.  That does not change what I think of this story. It is my choice to leave a review giving my personal opinion about this book.*