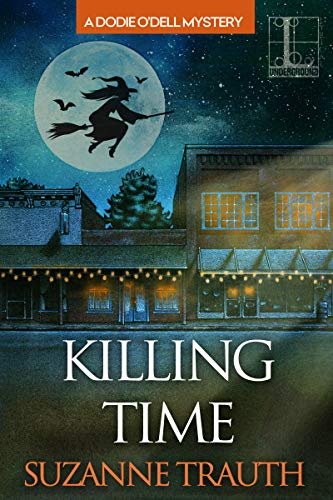 Although I have not read the previous stories in the ‘Dodie O’Dell Mystery‘ series, (an oversight that will be corrected soon) I wasn’t the least bit lost in ‘Killing Time‘.  Anything that I absolutely needed to know was mentioned in dialogue or narrative, and the rest simply falls into the ‘just read the book and enjoy’ category for me.  For this reason, I’d say that you ‘could’ read this title on its own, but I’m sure there are nuances I missed by not having read the earlier books.

It’s Halloween time in the small, quirky town of Etonville.  The local theater company is putting on a Dracula performance for the spooky holiday. What no one expected was for a very realist newcomer to play Dracula – or for the Grim Reaper to end up in the local cemetery with what appears to be a stake through his heart.  Now there’s a mystery needing to be solved before people really begin to panic at vampires and such overtaking the town.

Dodie is newly engaged to Bill, the local police sheriff and at his request has sorta kinda scaled back on the solving mysteries part of her life.  Really, she never intends to get caught up in them it just sort of happens when her own unique ‘spidey sense’ shows itself.  And that murder radar is blaring right now as Dodie is, once again, pulled in to investigate another murder.

‘Killing Time‘ is full of twists, turns, red herrings, and surprises – and I had such a good time with all of it.  I usually try to not get so far into a series before reading the earlier ones but time got away from me on this one… still, I had no trouble following along and completely enjoying myself in this world.  As with any review, especially Mystery of any kind, I’m careful of spoilers – so, perhaps vague but I had fun being caught up in this world and I’m betting you would as well.  If you love Cozy Mysteries then this is one you’ll want to add to your list if you haven’t already.