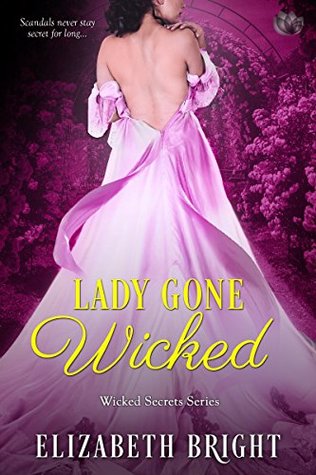 Nicholas Eastwood is finally about to get everything he ever wanted. As a reward for his service to the Crown, he has been offered the title of marquess. All he has to do is stay scandal-free until the papers are signed. There’s just one problem: His ex-lover, presumed dead, is remarkably alive.

Adelaide Bursnell is determined to right her wrongs. She will be a dutiful daughter and loving sister. Most importantly, she must marry before her scandal catches up to her. Nicholas was once her ruin, but now he is determined to be her salvation. If he can find her a suitable husband, their shared past can stay buried.

Titles in the Wicked Secrets series include:  Twice As Wicked – Lady Gone Wicked –

If there is one thing I’ve learned about secrets over a lifetime, it’s that they very rarely remain secret.  Adelaide was learning this lesson first hand.  She’d given her heart, and more to the one man she believed would never let her down… until he did.  Nicholas also knows the harm that secrets can bring to a life, most directly to his.  After all, he’s made a career of secrets… learning others and keeping his own close to his heart.  He’d loved one lovely lady and once again was left on the outside when her disappearance turns out to be something far different than he and others believed.  Now they are both faced with some truths – and need to decide which will win –  the secrets that should be kept or the love that never died.

Lady Gone Wicked is a passionate, humorous, and decidedly wicked romance that is full of secrets, misunderstandings, misdirection and finally being true to yourself and your feelings for someone else.  Adelaide and Nicholas are a delightful couple, even when they believe the worst of the other.  The twists and turns of this plot will keep you engaged.  The banter and funny moments between two sets of twins and their loved ones will bring a smile as you watch two lovers untangle the mess they’ve made of their relationship.  With danger, humor and passion Lady Gone Wicked is a story that will have you hoping for more – and that is delivered quite well.

Because, in some ways, Adelaide and Nicholas’ story actually has its beginning in Twice As Wicked, I would strongly recommend reading this series in order.  You would not be lost if you don’t, but you would certainly miss a delightful story that begins this wickedly enjoyable series.

« Branded by Firelight by Paula Altenburg
The Curse by Harper A. Brooks »