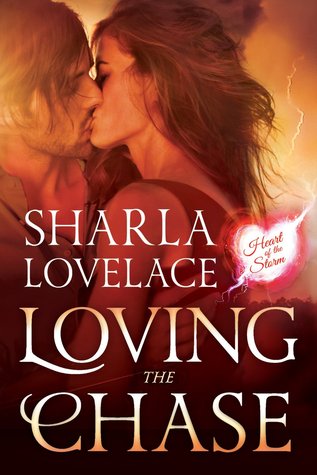 Charming, adventurous Zach Chase has always craved the spotlight, and now he’s on the hunt for publicity for his family’s storm-chasing business. So when a reality TV network approaches him with the idea for a show profiling their work, he can’t resist. But the last person he expects to walk into the meeting is the former love of his life.

Production assistant Maddi Hayes was once engaged to Zach—until she was almost killed by a tornado he was out chasing. She walked away from her fiancé and their future together, convinced she’d always come second to his dangerous career.

Dreading the show and anxious over working so closely with Zach, Maddi also knows this project could mean big things for her career. If only Zach weren’t still so infuriating…and so infuriatingly sexy. Can they finally let go of their stormy past? Or will the passion still raging between them win in the end?

Read on for my thoughts on Loving The Chase.  No true spoilers, promise.

Loving The Chase is the first story in the series, Heart of the Storm by Sharla Lovelace.  We are introduced to a family of storm-chasers, their friends  and their romantic adventures.

Zach and Maddi have past history.  Seven years ago, on what was supposed to be the best day of their lives, Zach decided to fit in one fast storm chase.  Unfortunately for them both, the storm came to Maddi – and it destroyed more than the building they had shared.

Today Zach is heading for a meeting that will change lives and bring the past, present and future crashing into each other much like the storms he and his family chase.  Maddi is now the assistant to the Associate Producer on a new reality series pilot featuring the Chase family.  She never expected to come face to face with Zach again.  Oh, she’s never stopped loving him no matter how hard she’s tried.  But the storms were always first with him and she got tired of being in second place.  She was supposed to be behind the scenes on this pilot, Nichole was the lead but today she finds herself sitting in for her boss and across the table from the man who broke her dreams and her heart.

Zach has never forgotten the consequences of one wrong decision on the one important day that should have belonged to Maddi.  His love for her was as strong today as it ever was.  But she had made her decision and he honored it, no matter how much it hurt and left him half alive.  Zach found himself among “suits” today because he believe that this reality show was the best way to get the funding his family needed for their storm chasing equipment.  Okay, sure there were other ways to fund it, but this way also got the information out about storms, tornados and safety planning for those destructive events.  So it was a winning proposal all around in his mind.  He’d have to do some fast talking to get his brother, Eli onboard – but he’d face that bridge once he knew this project was a go.  The last person he expected to see in this meeting was the woman who had always held his heart in her hands.

Since Loving The Chase is the first novel in this new series, I was excited to fall into this dangerous and thrilling world of storm chasers.  World-building and characters relationships matter to me when investing my time and money into a series.  Ms Lovelace took the time to build a fascinating world and believable characters to populate it.  Yes, there is building in the beginning of this story.  No, I did not find that slow moving since it is building the emotions and reasons why I should give a hoot about this family and their dynamics… and this entire series.  I mention this because I don’t want you to miss out on an amazing story because there is a slow build up to the storm action.  Storms happen in their own timing, none can be hurried along.  The same goes for a good series, the people and events have a beginning, a middle and a conclusion.  Please don’t miss the best parts because you don’t get to go on a chase in the first chapter.

Maddi reluctantly returns to Cody, Texas.  Once her home.  Once the place she felt the most alive with a family that loved her as their own, even before she and Zach had fallen in love.  She’s going to have to face people she has hurt and she is unsure of how to deal with the emotions that simply will not settle down.  She loved these people to this day and prayed for at least warmth instead of the cold welcome that she felt she deserved.

The dynamics of the Chase family are entertaining, funny and so real to life.  I am looking forward to all of their individual stories in future novels.

Just like the storms building, Maddi and Zach will find their way back to each other.  But once again – one bad decision will change lives.

I was caught up and captivated by Maddi and Zach’s story.  We come into the story understanding that they love each other, seeing that love be rekindled was a joy.  The storm action is intense, vivid and as close to a real tornado that I ever want to come.  Loving The Chase is a wonderful story of family, lovers, the thrill of the storm chase and a good lesson in how actions have consequences, even if we don’t see them at the time.

I would highly recommend Loving The Chase for anyone who loves a thrilling, adventurous romance with a family that’s so easy to fall in love with.  I plan on following the Heart of the Storm series – and I think after reading this one, you will too.

*I received an e-ARC of Loving The Chase from the publisher and NetGalley in exchange for an honest review. That does not change what I think of this novel.*

Available August 25, 2015 in paperback, audio and for the Kindle

« Not Quite Enough by Catherine Bybee
Review: Hidden Treasure by Melody Anne »