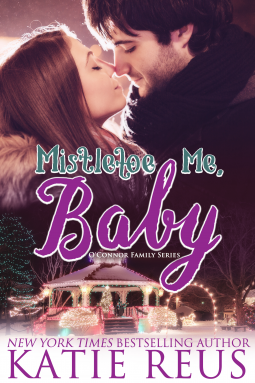 I’m always up for another visit to Holly, North Carolina – especially when Nolan gets his chance to shine in Mistletoe Me, Baby.  Although Nolan wants much more than friendship with Miranda she’s always placed him firmly in the best male friend category. To be fair, she has a lot on her plate so for the time being Nolan has been somewhat content to keep her close however he can manage.  Yet his golden chance for more arrives with a surprise visit from Miranda’s parents… and maybe she’s been telling them about the man she’s going to marry except he totally does not exist.  One friend to friend favor later and Nolan finds himself happily engaged, and intends to remain that way.  Now all he has to do is convince Miranda that she has room for him and for them in her hectic life.

Rough patches happen in every life, we cannot avoid them.  When Miranda’s life is hit with tragedy her reaction is to pull away from Nolan.  He won’t let her for she needs him now more than ever.

I’ve enjoyed the O’Connor Family series.  I’m always given a realistic story with believable characters.  Mistletoe Me, Baby was no different.  Nolan and Miranda were that unique couple who could count on their friendship as much as their love for each other.  Yes, Miranda’s instinct is to shut Nolan out but that didn’t last long.  I was emotionally involved in their story.  Full of the delights and annoyances of small town living, loving family all around and a couple who have long passed the friend zone, even if it took them a bit to realize that.  I love this one and would recommend this story and the entire series to any reader who loves small towns, lively secondary characters who get to tell their own stories, and a realistic situation for a couple to deal with.  This one is a Christmas gift you give yourself.  Enjoy.