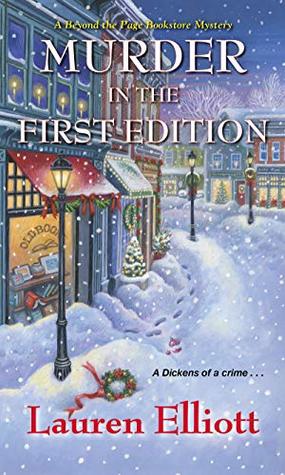 I will admit that I haven’t read the earlier stories in the Beyond the Page Bookstore Mystery series –  but that will be easily remedied because I’m now hooked on knowing everything about the residents of Grey Harbor.  Also, since I didn’t have a background to go on (broke one of my own rules here) I was able to pick up on what I needed to know about this series, these characters through comments in the dialogue and interactions of the characters.  So, yes, you could read this one on its own… but I intend to go back and get caught up on what I missed firsthand.

MURDER IN THE FIRST EDITION has a Christmas-y feel in the background as Addie goes about dealing with the sudden appearance of the father of her late fiancé in town.  When a murder victim is found by Addie, and the rare, valuable book she donated is missing it’s time for her to go into “solve the mystery” mode.

I enjoyed this cozy mystery very much.  The characters are lively and interesting, the plot was unsolvable for me before the reveal, and the banter between friends felt realistic.  I rarely try too hard to solve the mystery, I enjoy watching how it all comes together – and I had a blast with this story.  If you love a good mystery, if engaging characters and an interesting plot matter to you, then you’ll want to pick up this latest addition to the series right now.

« Cooking Up Trouble by Lenora Worth
Lethal Nights by Lora Leigh »