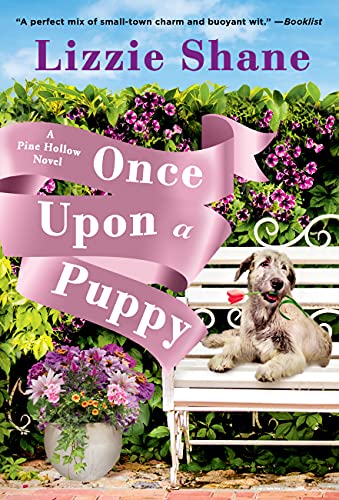 Opposites attract when a straitlaced lawyer and whimsical party planner must fake-date as co-parents of a rambunctious Irish wolfhound in the second book of this im-paw-ssibly charming small-town romance series.

Connor Wyeth has a plan for everything. But when he adopts Maximus, an unruly Irish wolfhound mix, he gets more than he bargained for. If he doesn’t act fast, the big dopey mutt is going to destroy his house.

The only person Max ever listens to is the volunteer who used to walk him at the shelter—a perennially upbeat woman whose day job is planning princess parties for little kids. Connor couldn’t even imagine that she’d be able to tame such a beast as Max, but he’s desperate enough to try anything.

Deenie Mitchell isn’t looking forward to spending more time with uptight, rules-oriented Connor—no matter how attractive he is. But when her sister announces her engagement, Deenie realizes he’s the perfect person to impress her type-A family. When she learns he needs a plus-one for his law firm’s work events, an unlikely alliance is formed.

But as they play the perfect couple, the friendship—and the feelings—that are forming start to feel all too real. Opposites may attract, but can the man with a plan for everything and the misfit who makes her own rules ever find common ground?

Once Upon a Puppy is the second title in the Pine Hollow series, and it is an adorable puppy vs straitlaced human romance that I fell in love with on sight.

Max is an Irish Wolfhound mix who is as rambunctious as he is cute.  In fact, he’s a bit more than his new adopted dog dad expected to be handling.  Max is in puppy love with a woman who used to walk him back before he was adopted, Deenie could do no wrong in Max’s eyes.  So, against all logic, Connor sets out to convince Deenie to help him train this adorable puppy who is on the verge of being untrainable in Connor’s eyes.  And Connor is going to get a whole lot more than he bargained for in this deal.

I had such fun with Max, along with Connor and Deenie.  Laughter, annoyance at times, falling in love with someone neither ever thought they’d be attracted to let alone want a life with.  Sometimes opposites do counterbalance each other perfectly.

Once Upon a Puppy is well written, flows smoothly, gave me more than a few chuckles along the way, and a lovely couple to cheer on to their happy ending.

This story also deals with situations that so many of us face, either for ourselves or a beloved family member.  Deenie’s situation was handled with love and care, yet another reason why I love this author.