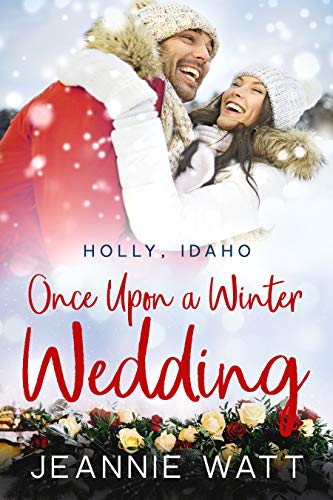 Once Upon A Winter Wedding, the second story in the Holly, Idaho series brings us a couple who will delight and confound us often in the same breath.  I enjoyed Brant and Stevie’s sort of enemies to lovers romance and the chance to visit Holly once again as well.

Back in their high school days, Stevie was trying to help her friend, Kara (Brant’s sister).  Her help was well-intended yet Brant blamed Stevie for things that truly were not her fault… but brothers will be brothers and those bad feelings held between them for years.

Now Kara is asking both Stevie and Brant to plan out her wedding since she is stationed overseas and cannot personally do this because she wants it held at the family tree farm.  A place that Brant is desperately trying to save.  Two people have to set aside their own personal feelings in order to help a friend and sister, but can they do that and not let a different set of emotions get in the way as the past fades and the present looks very good on each of them.

Brant and Stevie are such opposites and for good reasons that make sense, yet watching them slowly change their mindsets was an enjoyable experience.  Once Upon A Winter Wedding is full of chuckles, a bit of angst, lively secondary characters, hints of what is to come in the series, and two people who given their history should never have worked as a couple… but love often sees with different eyes.  I had fun with this couple and will be keeping an eye out for the next story in the Holly, Idaho series.

« Merry Christmas 2020
Secret Nights with a Cowboy by Caitlin Crews »