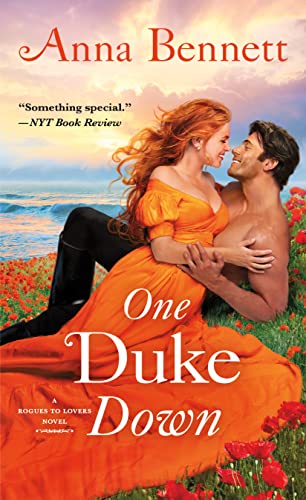 A FISHERMAN’S DAUGHTER
Miss Poppy Summers is determined to keep her family’s fishing business afloat. Her poor widowed father has fallen ill, and her foolhardy brother has moved to London, leaving her precious little time to read or pursue her own dreams. But she’ll do anything for her family, so she cheerfully spends mornings in her rowboat, casting her nets. The very last thing Poppy expects or wants to find tangled in them is a dangerously attractive man. Especially one with a head wound—who’s convinced he’s a duke.

AND A DUKE OUT OF WATER
Andrew Keane is the Duke of Hawking, but he’s having the devil of a time convincing his fiery-haired rescuer of that fact. The truth is he came to the seaside resort of Bellehaven Bay to escape his life in London. Unfortunately, someone in Bellehaven wants to kill him—and he intends to find out who. He implores Poppy to tend to his injuries and hide him on her beach, reasoning it will be easier to find his attacker if that man assumes Keane is already dead. She wants no part of the scheme but can’t refuse the generous sum he offers in exchange for food and shelter while he recovers. It’s a mutually beneficial business arrangement…nothing more.

ARE ABOUT TO MAKE WAVES
Under Poppy’s care, Keane regains his strength—and a sense of purpose. As they work together to solve the puzzle of his would-be murderer, he’s dazzled by her rapier wit and adventurous spirit; she’s intrigued by his mysterious air and protective streak. Though Poppy’s past gives her every reason to mistrust someone like Keane, the seawalls around her heart crumble in the storm of their passion. But when clues hint at the prime suspect in Keane’s attempted murder, Poppy must decide where her loyalties lie. Torn between the world she’s always known and the one she’s always dreamed of, she’ll need true love for a shot at her fairytale ending.

One Duke Down is the second title in the Rogues to Lovers series, and if that stunning cover doesn’t entice you, well, the story within will certainly do that all on its own!  Whenever possible I prefer to read series in order, it gives me a better feel for the world I’m entering… yet, One Duke Down could be read on its own without any problems at all as anything you’d really need to know from the previous release is mentioned in passing.

I adored Poppy and Keane both individually and as a couple.  Both are a bit stubborn, headstrong, and determined in their own right, yet together they bring out all the best in each other with very little effort.  All that you’d need to know before picking up this title can be found in the cover description but it’s their emotional connection, and the really “seeing” each other for their own worth that had me invested in their story.  Yes, they come from far different worlds, and Keane is determined to discover who wants him out of the picture but I didn’t feel that those things got in the way of their emerging reactions to how they felt about each other… if anything, their differences only added to the charm of their story as each must take a step back and try to see the world from a different viewpoint which can make all the difference in a relationship.

I had such a good time in this couple’s world and would not hesitate to recommend One Duke Down to any reader who loves a well-written, steamy romance with touches of humor, danger, and possibilities.  This couple is believable given their circumstances, but the sparks will soon turn to something deeper, longer lasting as a love that could last a lifetime.  Yeah, such a good story!