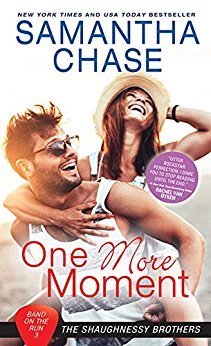 When Charlotte Clark offers to pay for Julian Grayson’s coffee, the world-famous drummer assumes she wants something from him. But Charlotte has no idea who he is, and Julian can’t resist keeping up the charade—being incognito is a novelty and a relief. He’ll have to tell her…eventually. But as Charlotte cheerfully undertakes to transform his life, Julian realizes there’s something about her that gives him what he hasn’t felt in years: hope.

Titles in the Band on the Run series include:  One More Kiss – One More Promise – One More Moment –

It’s always a bittersweet moment for me when a series I’ve enjoyed comes to a close – but what a story to finish off the Shaughnessy Brothers: Band on the Run series.  If you need a feel good romance in your life right now, this is the story you’ll want to pick up.  Charlotte is that heroine you’ll fall in love with and want for your best friend.  She’s upbeat, sees the good in all people, gives far beyond the criteria of her “job” and is simply a good, nice person.  Her first encounter with Julian shows her core beliefs and she, frankly, was a joy to encounter.  Julian is… harder, more cynical, definitely wounded in ways that he himself keeps perpetuating.  Yes, he’s a famous rock star who cannot believe that someone would do a good deed simply because they could with no payback in any form their goal.  He’s been shaken to his core by his wedding that never happened experience, and by other life lessons so he allows Charlotte to believe what she thinks she sees, a man down on his luck, and enjoys being seen for himself for a change.  He’ll have to tell her the truth eventually, but for now he’s simply going with the flow that is Charlotte at her very best… real, honest and giving.

I admit, there were times that Julian was hard to take.  Yet when he finally got his “aha” moment, that was golden to see the man he could become once he left the past where it belongs, in the rear-view mirror.  It was fun to run into familiar faces, and I leave this world happy with the series and the people I met in Band on the Run.  Now I’m looking forward to what Samantha Chase brings us next.  I would definitely recommend One More Moment to any Romance reader who enjoys touches of reality, a believable couple and a very good story.