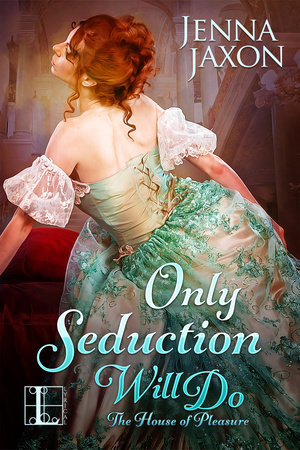 In a vulnerable moment, Alethea Forsythe allows herself to be seduced by a married peer. Now she is with child—and without recourse. Her reputation will soon be in tatters and she will be forced to wed a stranger—unless she takes matters into her own hands.

When Jack Fitzwilliam, the Earl of Manning, is summoned from the House of Pleasure on a matter of importance, he hardly expects to receive a marriage proposal. He’s long been aware of Alethea’s infatuation with him, but at twenty-three, taking on an expectant bride is not in his plans. Yet the desperation in the lady’s lovely eyes overrides his misgivings.

Alethea would not have believed it possible for a man to be too chivalrous. But though her new husband is perfectly amicable in public, he insists they maintain separate quarters. Desperate to possess his heart and prove herself a wife in every way, she boldly reaches out to Jack. And as their unexpected connection between silken sheets is tested by jealousy and misfortune, Jack must decide where honor ends…and true passion begins.

Alethea made one mistake, and it was a huge one.  She’d allowed a man, a married man, to sweep her off her feet and into major trouble.  While, at the time, it seems that her reputation and life as she knew it is beyond her control, that one encounter will lead to the love of her life… if she can convince her new husband that the marriage they’ve entered into can be as real and as loving as they’d ever dreamed possible.

Only Seduction Will Do is a well written, engaging romance where Alethea and Jack will face some rather large obstacles on the road to true love  Jack had no desire or intention of marrying.  He agrees to take Althea as his wife, but in name and in public only.  There will be nothing else between them if he has his way.  He might have ended up with an unwanted wife, but she would not disturb his life beyond what is necessary.  Althea has always had a bit of a crush on Jack, she knew full well that her husband wanted to keep her at a distance – and on some levels she understood that.  But circumstances change, life happens and Althea will win the heart of her husband one way or another.  And if seduction is that pathway, then she’s quite willing.

I enjoyed my time in this world.  Although I’ll always suggest starting a series from the beginning, if you cannot then Only Seduction Will Do could be read on its own, there is mention of previous couples but nothing that would be confusing or take away from this romance.  There is a possible trigger situation here, one that I believe would be a spoiler if I mention it in more details.  If you love a good Regency Romance then you’ll want to pick up this title and perhaps the entire series.  A love story between two people who didn’t expect to fall in love, a few twists and definitely a happy ever after.

Tags: House of Pleasure #4, Jenna Jaxon, Only Seduction Will Do, Regency Romance