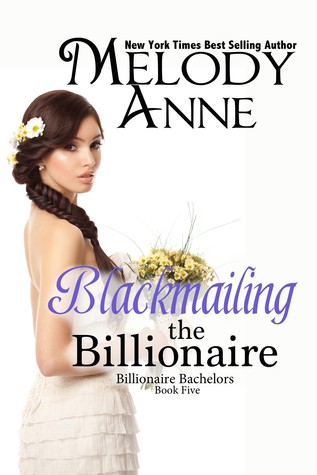 Cassandra, or Cassie, as everyone calls her is trying to get her big break into the journalism world. She wants an exclusive interview with the famous Max Anderson. But, the man refuses to return her calls. She isn’t willing to give up, but fate steps in and helps her out.

She’s out taking a walk one afternoon, when everything goes dark. She wakes up in the hospital to find out that she’s been hit by a car by none other than Max Anderson. He offers to pay her off, but there’s only one thing she wants from Max, and that’s to get her exclusive interview.

Max agrees to Cassie’s interview, but only because she intrigues him. He wants to spend time with her to find out why he can’t get her out of his mind, day or night.

Read on for my thoughts on Blackmailing the Billionaire.  No true spoilers, promise.

Cassie has some preconceived ideas about Max Anderson.  All she really has to go on are stories and photos from the media since Max is an expert at avoiding personal interviews.  If she could only get that exclusive interview, that one on one that no other journalist has snagged then her career would be set, or at the very least on it’s way with a solid start.  Trouble is the elusive Mr. Anderson is avoiding her calls – how can she write the story of the year if the irritating man won’t even speak with her.

Max is on to his meddling, matchmaking father and uncle.  No how, no way is he going to get caught up into that trap.  He is quite happy with his life just as it is, thank you very much.  Okay, so maybe seeing the love among his relatives leaves him wondering, maybe the adorable kids always around make him smile – no.  Not going to happen.

But fate has it’s own timeframe – meddling fathers and uncles aside.

One moment, one second of distraction is all it took to change two people’s lives forever.  Cassie had been out running, or maybe simply running from her annoyed thoughts about the stubborn Max Anderson’s refusal to talk to her.  Max had left the office on his way to freedom for a short time, a glimpse away from the road resulted in feeling a bump with his car – and his heart stopped.

Cassie wakes up in the hospital after being hit by a car.  She’s been out of it for several days, but upon waking really doesn’t understand why she’s got a private nurse, or such an amazing private room in this hospital.  Until she hears one sexy voice that sends tingles up her spine and discovers exactly who had hit her with his car.  Max Anderson.

Max’s legal team had put together a very attractive “I’m sorry I hit you” kind of payoff agreement.  Financially it could set Cassie up for life – but she had another request instead of his money.  She wanted an exclusive interview, shadowing him and getting all the inside dirt on his private life.  She didn’t want his money, but she did intend to get his story.   Some might call it blackmail, Cassie called it even.

I have adored the Anderson family since I first met them.  Yes, the matchmaking father and uncle are always scheming, but that is part of the charm of these stories.  They want their family to be happy, to know the love and contentment that they had with their own spouses.  Is that so wrong?  I don’t think so, and I am always happy to see another of this large brood meet his (or her) match in love.

Blackmailing the Billionaire is slightly different in that Joseph and George are not obviously the reason these two got together.  That doesn’t mean that they can’t do a tweek here and there though.  Max and Cassie were adorable, and it’s always fun to watch a stubborn man who says he doesn’t need love in his life fall, and fall hard.

If you are looking for a fun, sexy, enjoyable love story – in my opinion, you cannot go wrong with Blackmailing the Billionaire, or any of the other Anderson family novels.