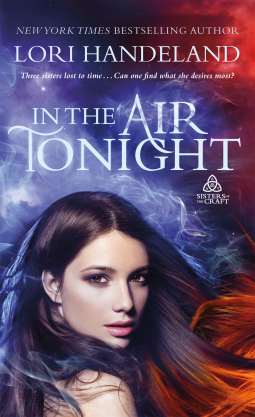 Read on for my thoughts on In The Air Tonight.  No true spoilers, promise.

So, how to tell you how amazing this novel, the first story in the Sisters of the Craft series, truly is without giving away major spoilers.  That is going to be the challenge within this review.

Raye Larson sees ghosts, she has always seen ghosts it’s just as she’s grown older she doesn’t mention them to other people much.  But they are always there.  At times the ghosts need help solving how they died before they cross over.  This time she cannot keep one ghost’s appearance from everyone as she is going to need more help from another person.

Homicide Detective, Bobby Doucet is tracking a serial killer.  The trail has lead from New Orleans to Bergin and Raye.  As Bobby and Raye become more involved in the murder mystery and each other – Raye’s amazingly unusual past begins to be revealed and that will change her life forever.

Sisters of the Craft is a three novel series, and the beginning of that series, In The Air Tonight, promises great reads are ahead of us.  I enjoyed Raye’s story very much.  In order to not give away what I feel would be spoilers, I’ve kept this review rather vague.  But the story is fast paced, intense, and the romance between these two is sweetly sexy (yes, that is possible).  There is magic, mystery and reunions.  This is a series that I highly recommend and I hope you will pick up this first novel and dive right in to an exciting story.

*I received an e-ARC of In The Air Tonight from the publisher and NetGalley in exchange for an honest review. That does not change what I think of this novel.*

Tags: In The Air Tonight, Lori Handeland, paranormal, romance, Sisters of the Craft #1

« Would you read Christian Grey’s viewpoint?
Review: One Night with the Cowboy by Eve Gaddy »