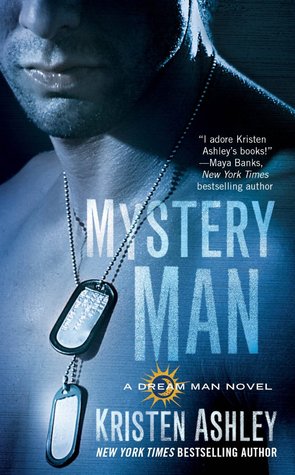 I recently received an ARC of Kristen Ashley’s newest Chaos series release, Ride Steady.  In truth, I should be doing that review right now.  But I wanted to go back to the beginning before I tackled Joker’s story.  Back to where I first met up with the Chaos motorcycle club, back to when I first fell in love with the men of this series and Kristen Ashley’s writing.  So I dusted off my Kindle edition of Mystery Man and started reading about 4 hours ago.  Read it in one sitting and re-lived the start of one of my favorite series all over again.

Cabe “Hawk” Delgado is an alpha man without any doubt.  He is a man of very few words, actions speak louder to him in many ways.  He’s also a man who has closed off his emotions, for reasons you will discover within this story.  His work, which is dangerous, is his life – until he walks past a restaurant and sees a beautiful, sexy lady laughing with her friend.  It was the moment he knew he wanted that woman in his bed – he didn’t know if he wanted her in his life yet, but definitely in his bed.

Mystery Man is a fast paced, sexy, steamy, testosterone overload delight.  Hawk will bulldoze himself into every aspect of her life with the intention of protecting her – and once he got a taste of her bull-headed sassiness, he was in deep.  Their lives were about to careen out of control with bad guys, close friends, crazy mothers.. and a sister at the center of it all who makes some very bad choices and leaves Gwen to deal with the consequences.  I loved this story and go back to this series often.  Yes, I love an alpha male – yet the men of this series are more than good looks and sexy moves (although they have those in abundance).  The ladies they love aren’t airheads, contrary to some scenes when you gotta wonder a bit – but at the core these stories are about strong men loving equally strong women who can put up with their crap and still decide to keep their alpha men no matter what.

This story is a combination of romance, mystery, action thriller and a steamy, sexy ride every single minute.  Mystery Man, the first novel, was released in 2012 and it is as good a read today as it was when I first picked it up years ago.  Some stories stay with you – these did and I loved every second spent with the alpha men of Kristen Ashley’s Dream Men.  If you haven’t discovered them yet, I would highly recommend that you correct that situation because you are missing out on some amazing stories.

Mystery Man is available in paperback, audio and for the Kindle