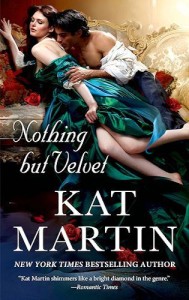 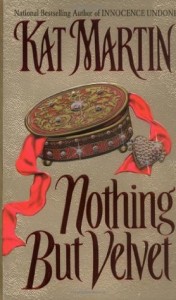 When we first meet Jason Sinclair he is a headstrong, stubborn, youngish buck, heir to the Duke of Carlyle.  He hasn’t taken his father’s declaration that he must not have anything further to do with his current lady love (if you could call her that).  Jason storms out into the night headed for his meeting with his love.. not knowing it will be his last night as a free man and that relatives can often be deadly.

let’s move ahead 8 years now… In two weeks Velvet Moran will marry Avery Sinclair, the Duke of Carlyle.  She has succeeded in saving her grandfather from the debtors and given herself into a loveless, marriage of convenience.  Avery has no idea that she and her family are penniless, she’ll save that bit of information for after the ceremony.  Hopefully Avery won’t be too angry.

Avery Sinclair is looking for an heiress.  One who can keep him in the style he enjoyed upon taking up the title of Duke of Carlyle – before his spending and debts gave him a title and no funds to keep up the pretence.  He needs every penny of Velvet Moran’s dowry and more, but that he will take care of later.  After all, a man can marry again after his beloved’s death.

enter… the Highwayman One-Eyed Jack Kincaid.  On their way to Carlyle Hall for her marriage,  Velvet and her grandfather are stopped by the highwayman.  Ordered to hand over her purse and jewels, Velvet believes the worst it past.  Until the highwayman declares his intention to kidnap her to hold for ransom from her soon to be husband.

and now the fun begins

Velvet does not take being kidnapped in the usual, weepy, terrified, easy to handle her manner of the young Ladies of her time – she takes Jack on a merry chase… through the mud.  🙂

I thoroughly enjoyed Velvet and Jack’s fiery start.  She does not feel kindly about being kidnapped and Jack got much more than he planned on when he came up with this plan to begin with.

We will follow their love story through anger, seduction, unveiling, and eventually justice will be served – even if it is 8 years late in coming.

Give this one a try – I believe you will really enjoy it.

Nothing but Velvet is available at Amazon in paperback and on Kindle.

« Review: Plaid to the Bone by Mia Marlowe
Review: In Serena’s Web by Kay Hooper »