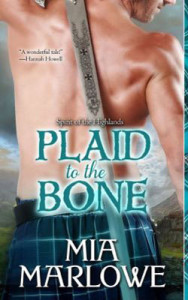 « Review: Plaid Tidings by Mia Marlowe
Review: Nothing but Velvet by Kat Martin »