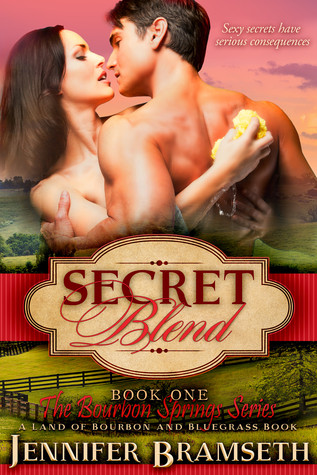 Sexy secrets have serious consequences in Bourbon Springs, Kentucky—in the heart of the Land of Bourbon and Bluegrass…

When longtime courtroom rivals Rachel Richards and Brady Craft get appointed to the bench in Bourbon Springs, Kentucky, tempers flare as they are forced to share chambers.

Working closely with the obstinate-yet-sexy Brady is not an attractive idea to Rachel—although she has to admit that Brady himself is pretty damned attractive.

Rachel doesn’t have to run for office to keep her judgeship, but Brady does. He draws a formidable opponent, Hannah Davenport, a wealthy co-owner of Old Garnet Distillery, where some of the finest Kentucky bourbon is crafted north of town along Old Crow Creek and near the historic springs which gave the town its unique name.

And Hannah just happens to be Rachel’s best friend.

As the judicial race heats up, so does the relationship between the judges—so they decide to keep it a secret.

But can any secret be kept in little Bourbon Springs, Kentucky?

SECRET BLEND is the first book in the Bourbon Springs Series, an upcoming nine-book series of smooth, sensual, sexy, slow-burn contemporary romances set amidst the lush and rolling Land of Bourbon and Bluegrass of central Kentucky.

Read on for my thoughts on Secret Blend.  No true spoilers, promise.

Kentucky is known for many things.  Bluegrass music, horses, a certain famous, big horse race with more fancy hats than horses, Southern hospitality, definitely liquor in various forms and charming small town living.  It’s the last two, bourbon and small towns, that we are going to run into most in this series.  And I can’t wait to get started.

Ah, elections and politics, friends and lovers, plus scandalous secrets often make very strange bedfellows. Rachel and Brady are both lawyers -with a history of being  on opposite sides of the courtroom.  Both have been appointed to the bench in Bourbon Springs.  Rachel has her judgeship, Brady on the other hand is going to have to fight for his in an election that will pit him against a wealthy, local business owner, Hannah, who also happens to be Rachel’s best friend.  Fireworks are sure to follow.

Rachel and Brady are sharing chambers – not happily I might add, since these two will argue over the smallest thing.  Funny thing about that though, they’ve known each other for the longest time, there might even be some underlying attraction there, if they could ever agree on something – like a date maybe.

Watching Rachel and Brady’s relationship grow was a delightful time.  Remember, this is small town living and thinking, so it’s not going to go as smoothly as they might like it to.  They can’t really show that they are in a relationship, but once that information got out it gave the wrong person ammunition to wreck havoc on more than just a campaign.  Sparks flew from this couple in more ways than just emotional, they are both strong, determined, dedicated people who stand up for their beliefs and causes  – each believing they are always right, and we know how that usually ends up.  Definitely some steamy, sensuous times ahead for Brady and Rachel as they fight for what’s right and for the love that is too strong to ignore or let go of over politics.

I really enjoyed Secret Blend and it’s many facets of a small town.  (I grew up in a Northern small town and man does this bring back memories)  Be on the look out for the secondary characters, remember this will be a nine story series – one person’s casual remark in this book could be their entire story down the line.  I love a deep series, and Bourbon Springs shows the beginning of a very interesting, intriguing and satisfying collection of stories in this unique small town in Kentucky.  I will definitely pick up the coming novels ‘cos I frankly do want to know what happens next – don’t you?

I would highly recommend this first novel in the series to anyone who loves series and the sense of living in that small town or those who simply enjoy a really good love story.  There is a lot to look forward to in this series.  Pick it up, sit back on the porch (maybe with a little bourbon of your own), and dive right in.  Enjoy.

Secret Blend is available for the Kindle