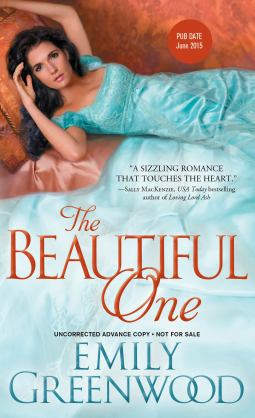 Tomboy Anna Black has no idea how a book containing nude drawings of her is traveling around town. Everyone’s calling the woman in the drawings the “Beautiful One,” but Anna knows that if her true identity is revealed, she’ll be ruined. To escape scandal, she becomes a temporary companion to the outrageous teenage ward of Will Halifax, Viscount Grandville.

Will wants nothing but to be left alone. When cheeky Anna unexpectedly arrives with his scandalous ward, suddenly he has two intolerable women filling up his once-quiet manor. But as Anna’s charms begin to soften Will’s hard exterior and uncover his shrouded heart, she hopes that love can fully blossom before her scandal erupts.

Read on for my thoughts on The Beautiful One.  No true spoilers, promise.

Anna had no choice but to go into hiding.  Unfortunately, the place she picked to hide in has sent her back out into the world at large as a companion to the young ward of Viscount Grandville.  Not that she minded Lizzie’s company, but she had good reasons for hiding from the ton and certainly did not need to be traveling to the country home of one of its members.

Will is far from pleased to find his recently deceased wife’s niece upon his doorstep… and to discover she is now his ward and is expecting to reside with him to too much to bear.  Will loved his wife very much, so much that the sight of any of her things or the improvements she had started around the estate simply could not be looked upon without wrenching pain – so he had them removed, hidden away in the attics.  Because out of sight meant that he only had his memories to bring him heartache.  Now, with Lizzie to consider, his personal grief only increased.  He had put all of his strength, time and energy into improving his tenant’s homes – it was mind numbing work, and that was exactly what he wanted.  Will had no idea of what to do with a teen ward, so he did what was now normal for him – he convinced Anna to remain and look after Lizzie.

His plan might have worked out well if Will and Anna hadn’t started to feel something for each other and if there weren’t nude sketches out there of Anna as The Beautiful One.

I enjoyed The Beautiful One and look forward to the next novel in The Scandalous Sisters series.  Will and Anna were well suited, and she certainly deserved someone to love and protect her.  The story was engaging, entertaining and had me rooting for this couple to overcome obstacles in the way of their happy ending.  I would highly recommend this novel to anyone who enjoys Historical or Regency romances or simply a fun love story.  I rated this one as 4 and 1/2 stars for one reason – the modern American speak brought me out of the story on several occasions.   While I do not expect to read verbatim ancient Regency London dialogue, it felt awkward to have an American styled comment come out of an Historical Romance character’s mouth, so to speak.  I do not mean that as an insult, so please no one interpret it as such – it is an observation that I fell out of the story at times because of it and that was unfortunate, as it broke the spell for me.  Yet, I will up my rating to 5 stars on the various review sites as it was a personal thing that had nothing to do with the loveliness or entertainment value of the story of Will and Anna.

*I received an e-ARC of The Beautiful One from the publisher and NetGalley in exchange for an honest review. That does not change what I think of this novel.*

The Beautiful One is available in paperback and for the Kindle

« Hello June ~ Welcome Back Around
Review: The Major’s Faux Fiancee by Erica Ridley »