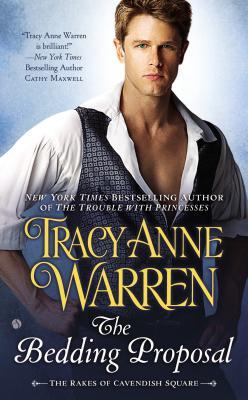 Lord Leo Byron is bored with the aristocratic company he keeps; he needs a distraction, preferably in the form of a beautiful new female companion. So when he sets eyes on fascinating and scandalous divorcée Lady Thalia Lennox, he’s determined to make her intimate acquaintance. But the spirited woman seems to have no intention of accepting his advances no matter how much he chases—or how hard he falls….

Once a darling of Society, Thalia Lennox now lives on its fringes. The cruel lies that gave her a notoriously wild reputation have also left her with a broken heart and led to a solemn vow to swear off men. Still, Leo Byron’s bold overtures are deliciously tempting, and, for the first time, she finds herself wondering whether it just might be worth the risk to let the attractive rake into her life—and her bed.

Read on for my thoughts on The Bedding Proposal.  No true spoilers, promise.

Lord Leopold Byron and his twin brother Lord Lawrence Byron have recently graduated from law school and set up their residence on Cavendish Square in fashionable London.  The brothers are members of a very large, lively family and rarely, if ever, lack for companionship… of any kind.  This night the brothers were attending a ball, both bored as usual.  Across the room a lovely woman caught Leo’s eye.  The beautiful Lady Thalia Lennox.  A beauty not much seen in polite company as she was surrounded by scandal and was publicly humiliated during divorce proceedings from her former husband, Lord Kemp.  Divorce was practically unheard of in the Ton, and certainly the woman was always at fault…. even when she wasn’t. Rumors were flying rampant around Lady Thalia, but again she was rarely seen about and rumors were just that rumors.  And of course, as always happens between gentlemen of the Ton, the twins made a wager.

Thalia realized that she had made a mistake coming out this evening.  Nothing changes, not even after six long years, she is still seen as the scandalous Lady K.  She had done nothing wrong, but of course no one believed her.  They believed Lord Kemp’s vicious lies and their own made up enhancements to the truth.  She was so lonely.  So tired of having no one to speak to aside from her few servants and her cat.  Oh, two of her former friends still kept in touch, that is when their own husband’s attention was elsewhere.  Even her friends could not help her, in a way they only made her isolation more intense.

Here we have the people most involved in this story.  Actually, mostly Leo and Thalia.  Along the way Leo will pull strings to get Thalia invited to events that he would just happen to be at as well – all in an effort to continue their acquaintance and perhaps move it along to another level.  But Leo hadn’t planned on seeing Thalia as anything more than a lovely, passionate bed partner.  When his heart threatened to become involved as well, he finally began to see and treat Thalia differently.

This story made me cry.  Cry for two people who obviously loved each other and could not, by the legal system of the day, be together for any possibility of a happily ever after.  In most Regency or Historical romances we rarely hear about the reality or brutality of divorce in that time of history.  In today’s world divorce is not that unusual – but back then it was life changing, especially for the woman accused.  The reality of Thalia’s divorce went beyond the loss of her husband – it involved the loss of everything, including her name.  And more – but to go into that would be a spoiler.

Living along side of Leo and Thalia through the words of this novel was exciting, aggravating, enlightening, angering and so full of love for these two, and the extended family of Leo.  It has been a long time since a story touched me as deeply as this one did.

This novel is available in paperback and for the Kindle.

« Review: A Match Made On Main Street by Olivia Miles
Review: Blood and Bone by Tara Brown »