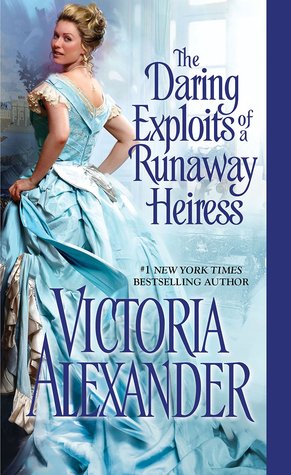 To Do:
Swim naked in the moonlight
Play in a high stakes card game
Ride an elephant
Be painted sans clothing.
Take a lover…

Lucy Merryweather has inherited a fortune—and her great-aunt’s list of unfulfilled wishes. What better way to honor her memory than by accomplishing as many of them as possible? And with Lucy’s family an ocean away in New York, nothing stands in her way—if one ignores the private investigator hired to spy on her.

Yet Cameron Effington is infuriatingly difficult to ignore…

As a reporter, Cameron is always looking for a good story. An American heiress running rampant between Millworth Manor and Mayfair is the perfect subject. Not to mention captivating. And extremely kissable. And if Lucy believes he’s a detective? Well, the truth should never get in the way of a good story—or hinder delicious, impetuous passion.

Read on for my thoughts on The Daring Exploits of a Runaway Heiress.  No true spoilers, promise.

The Daring Exploits of a Runaway Heiress is a delightful romp.  When Lucy and her long time friend (and the man her family decided she would marry) Jackson, finally let the world and their families know that there would be no marriage between them Lucy was now an American heiress on her own in London.  Jackson was off on his own adventures, and at Lucy’s logic and instance decided to allow her (Ha! As if he had a choice when faced with Lucy’s calm determination) to remain in London as long as she had a companion to ensure the safety of her person and her reputation among the ton.

Although she already came from a wealthy American family in the banking industry, Lucy received an inheritance from her Great-Aunt Lucinda (who she is named for) and a rather intriguing additional gift.  She also received a journal written by her Great-Aunt Lucinda which she called a list of regrets – things she wished she had done during her lifetime, even though she loved her husband dearly, still she had many dreams left unfulfilled.

Lucy decided to set out to make as many of those regrets a reality.  In a sense, doing them for Great-Aunt Lucinda – and of course, for herself and her own enjoyment of having an adventure.  Who knew what fun this might turn out to be?

Lord Cameron Effington, son of the Duke of Roxborough, finds himself in a bit of a wager with his father.  Cam has been writing for a newspaper of questionable reputation, he enjoys writing and has his own dreams of becoming a writer along the style of American Mark Twain.  His father wagers that Cam cannot write an entire book within a set amount of time (his other family members jump in on the bet, oh not that Cam cannot do it but that his father cannot keep his end of the bet).  If Cam loses he must give up writing for this particular paper, if he wins his father will stop hounding him about his choice of a writing career.  When Cam goes to his friend, a private investigator, looking for a bit of gossip and ideas for his book he is handed an excellent idea.  It seems there is an American Heiress whose family has hired one of the company’s investigators to be a companion in order to keep an eye on this lady to keep her out of trouble as she embarks on some sort of adventure.

What follows becomes the basis for our story of The Daring Exploits of a Runaway Heiress.

I enjoyed Lucy and Cameron’s story.  Lucy had some amazing adventures, and some close to disastrous ones as well.  Slowly through checking off items on the list of regrets they will find their attraction to each other growing.  If I, personally, wished that Cam were more assertive and had explained himself to Lucy much earlier – that was a personal wish based on my love of Alpha men, and Cameron could be describes as many things, but I never saw him as an Alpha.  There were many times I wanted to shake him or smack him upside the head.  And there were just as many times that I tired of Lucy’s ability to not see herself as judgemental, when she clearly was… yet, without those traits we would not have the engaging story that was told.

The Daring Exploits of a Runaway Heiress was an entertaining, enjoyable, lighthearted romance.  I would recommend this one for anyone who enjoys Historical Romances or simply a fun love story.

This novel is available in paperback and for the Kindle