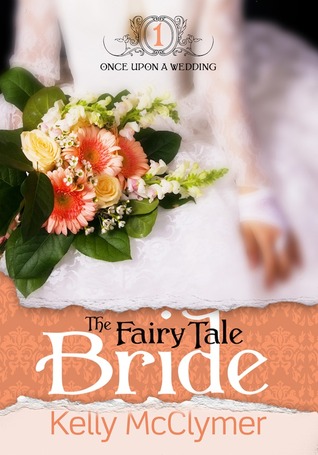 The Fensters were like many other proper Victorian families—in every way but one. Ignoring the grim convention that one married for wealth and title, these spirited siblings followed their hearts…and vowed to wed only for love.

Happily-ever-after is all she ever wanted…

Even though society thinks her all but unmarriageable, Miranda Fenster still believes in true love. She’ll do anything to advance its cause, even confront the man whose disapproval is all that keeps her dear brother from making a romantic match. But Miranda’s impetuous meeting with the Duke of Kerstone has a far different outcome than she intended. For when the cynical nobleman realizes she’s been compromised by their tryst, he insists on nothing less than marriage. Now suddenly, the champion of fairy tale endings finds herself a most unlikely bride!

Read on for my thoughts on The Fairy Tale Bride.  No true spoilers, promise.

I really enjoyed Simon and Miranda’s story.  Five years previous to the time of this story, Miranda was enjoying her first Season.  Thanks to the unwanted actions of a notoriously offensive man, her Season was cut short.  That same night Simon has offered Miranda and her mother a quick, discreet escape from the ball they were attending.  It was his intention of asking for her hand in marriage, but that could wait for a day or so, give her time to recover from her narrow escape at the hands of a scoundrel.  It was also the night that Simon walked into his dying father’s bedchambers – and learned a truth that would forever, in his mind, keep Miranda from becoming his bride, and keep him from claiming his title.

Miranda was determined to confront the Duke of Kerstone.  It was at Simon’s hand that the elopement of her twin brother, Valentine and the woman he loved, Emily, had come to a grinding stop.  Even now her twin sat in the study of their family home, despondent and getting drunker by the hour.  Simon could fix this, if he would only vouch for her brother.  She had tracked him down to this small building in the woods.  She would not leave until he saw reason.  Her brother and Emily loved each other, they deserved their happily ever after.

Unfortunately, Simon did not agree with her.

It was during this confrontation that absolutely everything changed for Miranda and Simon.  A small child, sent out on the road to “find a gold coin at the crossroads” had become lost and was hiding in the loft of the building.  And now, people were searching for her, as well as the aforementioned scoundrel’s arrival.  Even though she had hid, Simon considered that he had compromised her, since he knew the scoundrel personally and knew he’d not give up making trouble for them both… even though he had vowed never to marry – marry Miranda he would.

What follows is a story rich with family, fairy tale references, twists and turns, lies and deceits and a happily ever after – finally.  Getting to that point was a charming journey.

I enjoyed The Fairy Tale Bride and do intent to pick up the other novels in this series.

And now a bit of a rant:

I love fairy tales.  I grew up with them and I am a Disney girl for a very long time, so fairy tale Disney movies were a part of my life… as long as I can remember simply believing.  Which probably explains when I saw this as a “free” first novel offering on Amazon I snatched it up fast.

I knew it was an older novel.  Afterall, it’s not that common for a book with this many Kindle pages to go for free.  But I often go searching for the first novels of series – it gives me a very good idea if I want to spend the money to continue or not.  Or…*gasp* ask for them at my library.

What made me really sad was the moment I went to GoodReads to grab the cover and synopsis for this review.  Oh my goodness, the reviews.  I kept wondering did these people read the same charming novel I just finished?  They were brutal.  And it brought into a brighter light as to why I have a comment that goes “While this one wasn’t for me, you might love it.” .. for those novels that just didn’t grab me.  (No, I actually enjoyed The Fairy Tale Bride – that’s just an observation).  I’m glad I went there after I had already read this novel.  I might have missed the chance to meet some extremely charming characters, a few vile folks and a whole lively family.  And that is the reason I do not pay attention to negative reviews.  They are someone’s opinion, just like this review is mine – open to change and interpretation.

Tags: Historical, Kelly McClymer, Once Upon A Wedding, romance, The Fairy Tale Bride

« Review: The Widow Wager by Jess Michaels
Waiting on Wednesday #10 »