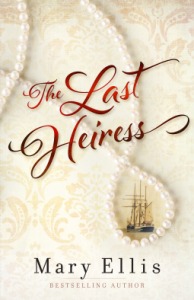 Bestselling author Mary Ellis (A Widow’s Hope) presents The Last Heiress, a new romantic standalone that intertwines the lives of a British manufacturing heiress and an American merchant caught in the turbulent time of the War Between the States.

When Amanda Dunn sets sail from England for Wilmington, North Carolina, she hopes to somehow restore shipments of raw materials for her family’s textile mills, which have been severely disrupted by the American Civil War. Though there is not much one individual can do, the wealthy young woman feels she must try, as her mother and hundreds of employees at Dunn Textiles are dependent on Southern cotton.

When Amanda meets Nathaniel Cooper, her desire to conduct business and quickly return to England changes. Though captivated by one another, neither is fully aware of the other’s true nature.

Nathanial, who on the outside appears to be a poor but hardworking merchant, is actually a secret Yankee sympathizer who will stop at almost nothing to bring about freedom for those who live under subjugation, even when that involves questionable judgment. And Amanda’s wealth is made possible by underpaid workers living in slums around the mills, not much different than American slavery.

Can these two earnest souls find the best in one another rather than focus on what could tear them apart? And though they both believe they are on God’s path, how will their decisions affect those around them?

Read on for my thoughts on The Last Heiress.  No true spoilers, promise.

The American Civil War was such a turbulent time in my country’s history.  A country divided.  Family pitted against family.  So many lives lost.  And while many wonderfully beautiful novels have been written about that time – in reality it was such a grey time.  (not Confederate grey)   But dark times, a war was in process for a just reason – no one should be held in slavery… and there is more than one type of slavery.  The divisions went deeper than war, it divided people beyond our country’s borders as well.  While mills in other countries required cotton to create their merchandise – it was not being shipped (or making it through the blockade).

Amanda’s family mills need cotton.  None is getting through to England.  So she has been given the task of traveling to North Carolina in the hopes of getting those shipments moving again.  It turns out to be a double-edged sword, for while she does get to see her sister again – a family tragedy has occurred back home which will change everything for Amanda.  It is through her sister, Abigail and her husband, Jackson that Amanda first meets Nathaniel.  A meeting that will change lives.  Nathaniel is not exactly what he seems on the surface.

I really enjoyed this story.  Two truly earnest people, who believe strongly not only in God, but in their convictions about the Civil War.  Two people from vastly different worlds have to find a way to make their own connection real and lasting.  The beauty of the South flows throughout the novel.  There is nothing quite as charming as the South, even in the midsts of war.

I think you will be blown away by the beauty, culture, and love story found in The Last Heiress.  It gets a 4 outta 5 from me.  Step back in time and enjoy.

*I received an e-ARC of The Last Heiress from the publisher and NetGalley in exchange for an honest review. That does not change what I think of this novel.*

The Last Heiress is available at Amazon in Hardcover, paperback and on Kindle.

2 responses to “Review: The Last Heiress by Mary Ellis”