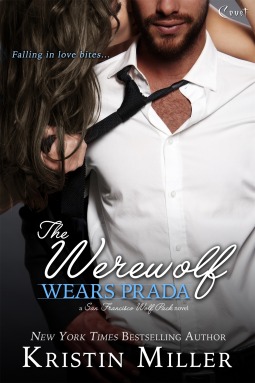 Melina Rosenthal worships at the altar of all things fashion. Her dream is to work for the crème de la crème fashion magazine, Eclipse, and she’ll do much anything to get there. Even fixing up the image of a gorgeous, sexy public figure who’s all playboy, all the time. Even if he’s the guy who broke her heart a year ago…

Even if Hayden Dean is a werewolf.

Since his father’s death, Hayden’s the heir apparent to the San Francisco Wolf Pack—well, once he settles down. Hayden isn’t interested in giving up his partying ways, except he’s pretty sure he’s found his fated mate, and the fact that she’s a non-shifter is bad news. Now he must find a compromise between the traditions of his wolf world and his certainty that Melina is his…before fate (or another werewolf) bites them both in the butt.

Read on for my thoughts on The Werewolf Wears Prada.  No true spoilers, promise.

Melina knows fashion and she knows where she wants to end up – trouble is, the jerk who stood her up for a trip down the red carpet a year ago is the one who needs her expertise  – and that means spending time with Hayden.

Hayden is the Alpha elect for the San Francisco wolf pack.  A playboy and a shifter with a truly bad boy image.  He needs Melina’s help, too bad it means spending a lot of time with her.  He certainly enjoys the playboy image he’s cultivated, but it isn’t what lies at his core.  In order to clean up his image just how much of his true self is he going to have to reveal as well.

And how in the world can a human, a non-shifter that doesn’t even know that he and his pack could possibly exist, be his mate?   Melina is strong, sexy, opinionated and not without her own type of claws that she often uses on him.  How in the world is Hayden supposed to keep her safe in the middle of a paranormal war with rogue wolves out to make trouble for him and anyone he might care about.  How can he bring her into his world as his mate, because come hell or high water, Melina is his – he just has to convince her of that fact.

I love this couple.  They are hot, and that means steamy hot and hot tempered too.  Stubborn, opinionated, each thinks they are right and most of all… loyal.  When Melina commits to Hayden, she is his in every sense or meaning of the word.  I’ve enjoyed Ms. Miller’s Seattle Wolf Pack series, and was really looking forward to this next series San Francisco Wolf Pack since I first heard of it.  If Seattle was any indication, we are in for the series of our lives.  And The Werewolf Wears Prada is a fantastic introduction to the new series.  Hayden is going to be an amazing Alpha leader for his pack, and now I’m waiting for the next novel out this summer.

I highly recommend this novel for anyone who loves romance, first of all – and definitely for those who love a really good paranormal romance.  Shifters are my favorites and when a good shifter novel or series comes along it matters to me.  This one looks to be a series that I will turn to again long after the series is complete.  Pick this one up, you will be hooked.

*I received an e-ARC of The Werewolf Wears Prada from the publisher and NetGalley in exchange for an honest review. That does not change what I think of this novel.*

The Werewolf Wears Prada is available for the Kindle