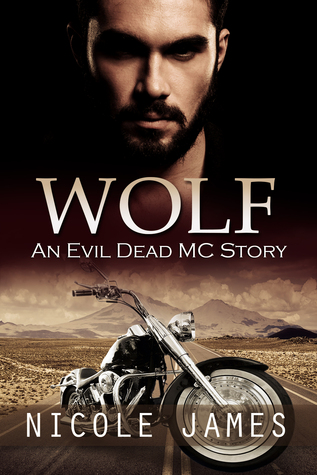 I am in love.  Would you all excuse me for a bit – I gotta go read this one again, just in case I missed a delicious, sexy detail somewhere.

Wolf was everything a reader could hope for in an Evil Dead MC novel, and then just doubled it.  I absolutely loved Wolf’s and Crystal’s story.  Ms. James gives us characters that simply step off of the page into our lives.  So realistic, no bs, just hot, badassed Alpha men – every single one of them and strong, sexy, sassy women to love them right back – sometimes in spite of themselves.

Crystal has loved Wolf from just about their first meeting at the clubhouse.  She on her knees, cleaning up broken glass from a fight brought about by her now ex boyfriend.  She looked up into those eyes and was simply lost.  Wolf looked down at her and smiled thinking “Mine, all mine”.  And so it began.

Let’s be frank here.  Sex has never, ever been a problem between Wolf and Crystal.  Truly a dominant alpha male, Crystal never had a problem with their sexy games and she enjoyed submitting as much as he enjoyed dominating her.  Wolf was in it for the chase, and in sex, Crystal never minded giving him that chase plus so much more.  The problem was in Wolf’s lack of commitment to her and her alone.  He never shied from parading one of his current lays in front of her.  She hated that but kept her mouth shut because she did love him – until the last straw.  Every woman has a last straw and this one was it.

Wolf had never intended to lay permanent claim to Crystal.  If pressed he would probably say he loved her and they both were fine with their arrangement.  In that he would be wrong.  Other members of the Evil Dead MC had women they had committed to, call them old ladies, wives, significant others, whatever – they committed to one woman and that was what Crystal wanted most of all.  His commitment to her alone.  The one thing Wolf felt he could never give her.  After Crystal had given Wolf’s current extra lady a beer shower at the clubhouse, lines had to be drawn.  Wolf was told to either make Crystal his woman or cut her loose.  One or the other.  Now.  He couldn’t do either.  In the end, Crystal left town, but not for that reason alone.  There was more than a broken heart involved.

And that’s where I’m going to stop.  You need to read this one.  You really, really do.

Of course Wolf isn’t just about Crystal and Wolf’s love/sex life – although these two have some of the hottest, steamiest, most delicious sex around.  *wink*  There is also MC business to take care of, which sends Wolf out of town for a couple days (long enough for Crystal to leave town).  A yearly trip to Sturgis.  A truly evil force that is out to destroy the Evil Dead MC’s businesses, deal and even their people.  And the four brothers from Brothers Inc where Crystal eventually went to work.

Please, please, please tell me there will be a spin-off series with these four brothers in it?  I so want to learn all about them and their tattoo business.  They sound totally delicious.

I will not spoil your fun of discovering every detail of this amazing story.  While Wolf is the fourth novel in the Evil Dead MC series – you do not have to have read the earlier ones to know who is who.  Sure, having read all of them does give a more fleshed out feel, but it is totally not necessary.  With a few sentences you will know exactly who is who and why.

If you have never read a Motorcycle Club novel, this would be a great one to start with.  I highly recommend Wolf, an Evil Dead MC story – it has everything you’d imagine and more.  And really is there anything more sexy than a guy on a Harley in cuts?  Be still my heart.  Go pick this one up and sit back and enjoy the ride.

*I received an e-ARC of Wolf – an Evil Dead MC novel from the publisher and NetGalley in exchange for an honest review. That does not change what I think of this novel.*

Wolf is now available for the Kindle