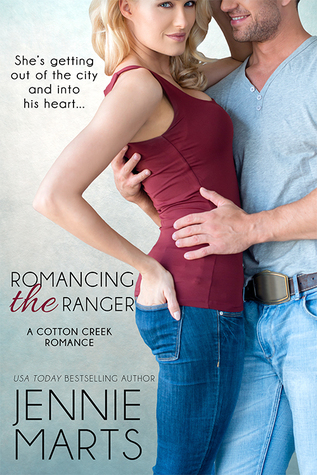 Reese Hudson meant to destroy mementos from her last failed relationship, not burn down an outhouse and incur the wrath of a sexy park ranger. When the judge rejects her offer to pay for the structure and sentences her to rebuild it—with the hot ranger supervising—she embraces the challenge to take control of her life.

Park ranger Wade Baker wants nothing to do with the rich city girl, no matter how tempting he finds her lush curves. She’s too much like his ex-fiancée, and if he’s learned anything, it’s that women like Reese don’t fit into his world. And he sure as hell wants no part of her big city life.

Reese may not know a hammer from a screwdriver, but she’s working hard to prove she’s not just some pampered princess to be toyed with. And damn it if Wade doesn’t admire her tenacious spirit. If only they got along half as well outside the bedroom as they do in it, there might be a chance for them after all.

Read on for my thoughts on Romancing The Ranger.  No true spoilers, promise.

Sometimes a romance comes across my e-reader that is just simply lighthearted, cute and enjoyable – it doesn’t try to be anything but what it is, an enjoyable read for the moment.  That is exactly what I found in Romancing The Ranger.  And it was exactly what I needed.

Reese may look like a pampered princess on the surface, but don’t let the top layer fool you, she is no ditsy airhead princess.  What she is right now is furious – she’s just broken up with her overbearing, scumbag of a boyfriend… and the reason that we find out a little bit later in the book as to why it all came to a head that day just makes the jerk even worse.  She’s driven out of the city to a place where she has good memories of spending time with her grandparents – into the mountains, on park property.  She has a box of mementos, gifts from her ex – mostly picked up by his secretary if truth were told, and she’s simply rummaging through them getting angrier with each item she picks up.  Reese just wants him gone from her life and thoughts, so when she sees the lighter down in the bottom of the box she does something impulsive.  She sets fire to an invitation… which sets up such a slapstick chain of events that I’m guessing you’ll be laughing out loud just like I was.  Bottom line?  She burned down a national park outhouse – and earned the wrath of a very handsome, very angry park ranger.

Wade is a small town man, he loves his work and wants nothing more in life than to be doing exactly what he is.  Unfortunately, Wade had been engaged to a money grubbing witch who took him for a lot of money – he’s still paying off the credit card companies and will be for a long time.  So when he comes across Reese at the parking lot and sees the burning mess she’s created he goes off on her.  Yes, it was stupid but she really didn’t deserve that reaction since Wade wasn’t lashing out at only Reese at that moment, but his ex as well.  Reese is sitting in the parking lot with an expensive car, a silly dog, designer clothes and a purse that would probably pay off one of his credit card debts.  He sees her as everything his ex wanted to be, and took from him.  He over reacted… but he didn’t get off so easy himself.

Romancing The Ranger brings us a delightful story of one woman who is finally fed up with the life she’s lived, one that wasn’t of her choosing but her father’s – she’s determined to strike out on her own, with her life under her direction and control, finally.  Sure, she makes mistakes, but none are intended to harm Wade – Reese is learning to be a new person, but Wade sees what’s in front of him and often he just makes things worse with his not so hidden dislike for parts of Reese’s life.

I enjoyed their romance very much.  It is full of sexy heat, laugh out loud moments and a few understanding tears of frustration and anger at Wade’s reactions at times.  Honestly?  Reese was a lot more understanding of Wade than I think I would have been.  At times that man needed a good shaking.

If you’re in the mood for a lighthearted romantic comedy and an adorable pup – then Romancing The Ranger should be on your radar.  I think you’ll enjoy Wade and Reese’s story.

*I received an e-ARC of Romancing The Ranger from the publisher and NetGalley in exchange for an honest review. That does not change what I think of this novel.*

« After The Hurt by Shana Gray
Resisting The Moon by L. P. Dover »