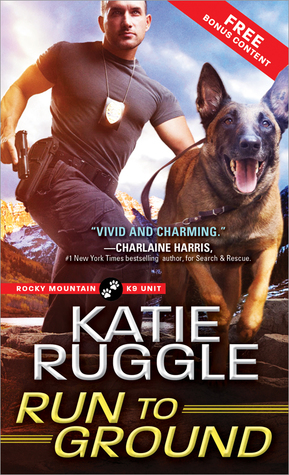 He lost his mentor.
He lost his K9 partner.
He almost lost his will to live.
But when a killer obsessed with revenge targets a beautiful woman on the run, Theo and his new K9 companion will do whatever it takes to save Jules before they lose their last chance at a happily ever after…

Theodore Bosco, grieving the death of his partner, is reluctantly fascinated by secretive newcomer Jules. Although his instincts scream that he should avoid her, he can’t seem to stay away. It doesn’t help that Theo’s new K9 companion, Viggy, has fallen head over paws with Jules’s rambunctious family.

Or that when he’s with Jules, Theo finally knows peace.

When Jules kidnapped her siblings, whisking them away from abuse to the quiet anonymity of the Colorado Rockies, she never expected to catch the eye-or the heart-of a cop. All it would take is one wrong move and she’ll lose everything. Yet as Jules attempts to fight her growing attraction to the brooding K9 officer, another deadly threat lurks much closer to home. Someone’s gunning for Theo and Viggy, and they’re willing to take out anything…or anyone…who gets in the way of revenge.

Titles in the Rocky Mountain K9 Unit series include:  Run To Ground – On The Chase – Survive The Night –

Theo has lost his human partner to death, and his K9 partner to disease.  He is in deep mourning for them both as well as taking on his partner’s also grieving K9 partner, Viggy.  He has deep emotional turmoil right now as he faces so many questions left forever unanswered.  In addition to his own losses he also must learn to bond with a new dog, one who has lost his best friend as well.  It’s an emotional black hole that Theo has no guarantee that he will pull himself or Viggy out of.

Jules has rescued (some might say kidnapped) her brothers and sister from their vicious step-mother’s abuse.  She’s run with them to a small mountain town in Colorado with the hopes of staying under the radar and staying hidden from any search that witch may make for them.  She’s got a house in desperate need of repairs, a job in a diner that is the haunt of a handsome, suspicious police officer… and somehow the adoration of one K9 dog deep in depression.  Just when she needs to fade into the woodwork two impossible to hide from characters enter her life.  She could run again, but Viggy has such a magical touch with her siblings… and against her best judgement, Theo has begun to get under her solid outer shell of protection.

Add to this mix one deranged person out for revenge not caring who is harmed in their pursuit and you have all the elements of an engaging Romantic Suspense romance, the type that Katie Ruggle does so well.

There is world building in Run To Ground, and I’m not convinced that the world building is complete for there are some threads that appear to be left dangling – I’m hoping to be filled in as the series continues.  I adored Viggy.  Jules is a strong woman with a lot on her plate who manages to protect her family and let Theo in as part of their own special unit.  Theo begins as a very brisk, contained man who is deep in his own depression.  His interest in Jules, his need to know what she’s running from and the need to protect them all when danger strikes makes him quite a complicated man.  It’s obvious that Jules and Theo have a connection, the question becomes will they let that connection grow and open up all their secrets to each other.

I enjoyed my time in this new world.  The story is intense, the characters believable and the suspense is high.  I would not hesitate to recommend Run To Ground to any Romantic Suspense reader who enjoys a mystery, cute kids and a very magical pup.