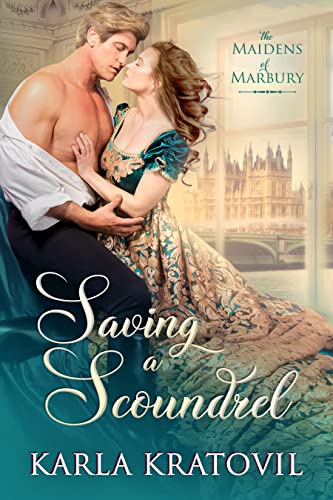 The death of a friend leads the cautious Eleanor Spencer to reevaluate her life. On a rare impulse, she kisses the man of her dreams—her best friend’s older brother. The moment of madness gives her the courage to take more chances. This spring, she will finally travel to London for the social season. All she needs is to compile a list of adventures to complete. At the top of her list? Kiss Lucius Grisham again…

Barely surviving since his father severed his funds, Lucius Grisham works two respectable jobs, and one decidedly disreputable job, just to keep up critical appearances. When Ellie becomes the target of a sordid bet made by his rakehell friends, Lucius must step in to protect his sister’s friend. As he finds himself pulled into helping Ellie with her list of adventures, he is surprised to find his jaded heart tempted by the innocent beauty. But Ellie Spencer is far too good for a scoundrel like him.

Ellie will endanger both her heart and her virtue to make Lucius hers. Can Lucius become the man Ellie believes him to be?

Saving A Scoundrel is the second title in The Maidens of Marbury series.  Although we met Lucius and Ellie in the previous story, A Perfect Engagement, for a brief moment — they shine in their own romance between a vicar’s daughter and a man of the ton who (according to his parents) has fallen from grace enough to cut off his funds making life rather… unique for this gentleman.

I loved both Ellie and Lucius for different reasons but together they just fit perfectly.  Ellie is quick-witted and has a voice that has been somewhat silenced by her circumstances in life and the times that she lived in.  She really only opens up to be her real self around those she trusts, her close friends, and the man she’s fantasized about forever it seems, Lucius.  The man she kissed unexpectedly thinking simply “Why not? It’s not as if he’ll ever be interested in me!”  That kiss stayed with Lucius for a long time and was part of the reason he decided to come to her rescue when things didn’t go smoothly during the Season for Ellie.

Lucius has made unwise choices and he’s living with the consequences of those choices now.  He believes he is unworthy of the love of a good woman like Ellie but that thought won’t stop him from helping her enjoy her time in London or to keep her from the scandalmongers as well.  I loved how Ellie really saw Lucius, the man he is at the core.  Getting him to see himself in that same light wasn’t an easy undertaking but she never gave up on the man she loves.  Lucius is stubborn, yes, but we slowly get to see him change even further, to become the man he was meant to be and to find confidence and love with the woman who means everything to him.

Saving A Scoundrel was such a fun experience.  The story is well-written with characters you’ll fall in love with, and a plot that will keep you on your toes.  If you love a solid, good Historical Romance then this story and series would be perfect for you.

*I received an e-ARC of this novel from Tule Publishing. The opinions expressed in this review are my own – good, bad, or indifferent.*

Available for your favorite e-reader.