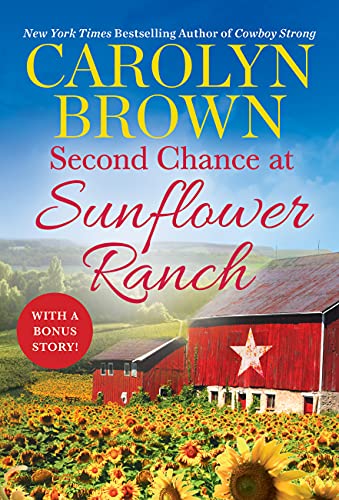 I’ll admit that I’m always excited to begin a new series by this author and Second Chance at Sunflower Ranch was all I could hope for as an opening story in the new The Ryan Family series… and so much more.  If you’re looking for a sweet with a bit of sass story and believable characters then you’ve found a great one to start off the series, a series that I’m already hooked on after just one book.

Almost two decades earlier, Addy and Jesse were best friends who always felt just that little bit more for each other but never acted on that attraction… until the night before Jesse left for the Air Force and a career as a medic that would keep him far from the ranch for years on end.  There were consequences from that one night in the form of Addy’s daughter, Mia.  Addy made the choice to not contact Jesse for he’d made his career choice and it wasn’t this ranch where he grew up with his foster parents.  Both went about their lives until Jesse returned to Sunflower Ranch to help his foster parents run the ranch after Sonny’s MS had taken a turn for the worse.  Addy happened to be the live-in home health care nurse who was taking care of Sonny… and the past was about to meet the present with surprises and one rebellious teenager who is about to make one huge mistake unless her path is changed.

Second Chance at Sunflower Ranch is such a delightful yet believable romance with characters who stole my heart early on facing some tough decisions.  Jesse is an honorable man in so many ways, yet it wasn’t fair to him that Mia’s existence was kept from him for so many years.  I understood Addy’s decision, up to a point, but this is one of the reasons that the secret baby trope is not one of my favorites.  It didn’t stop me from liking Addy, I simply wish she would have trusted Jesse to make his own informed decisions far earlier.  I liked Jesse instantly, yet I adored Addy, even though she did make some mistakes.  She’s such a strong character who has made the choice to go it alone as a single parent who is providing the best life for her daughter that she can.  Mia is… well, a teenager who is about to make a mistake that could change her life forever.  And like most teens, even older ones, she believes she’s grown up enough to not need her mom’s or Jesse’s approval for her actions.  Watching these individual personalities work their way to becoming a loving family, and Addy and Jesse finally admitting to their feelings for each other was an emotional, joyous journey.

All that and then toss in some amazing secondary characters that I hope will make a reappearance in the series and you have an excellent beginning to The Ryan Family series.  I have loved this author’s work for years, and I’m very excited to see where this new series takes me.  If you love a good love story full of family, sass, emotions, and second chances then you’ll want to pick up this one real soon.