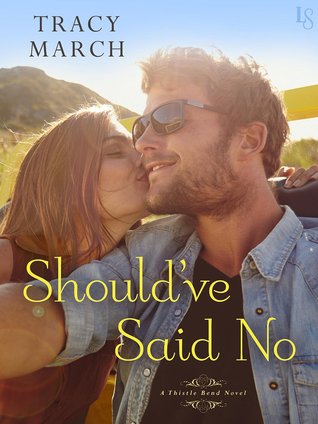 A year after being laid off from the Smithsonian, Lindsey Simms says yes to a job offer as curator of a heritage museum in Thistle Bend, Colorado (population 1,519). It could be worse—and it is. Because the new museum has escalated a dispute between the Karlssons, Lindsey’s relatives, and the Crenshaws, a blood feud which goes way back to a land deal that changed the fortunes of both families. Trying to stay objective, Lindsey can’t tell anyone about her conflict of interest—especially not the ruggedly handsome handyman fixing up her cabin, who seems to be keeping secrets of his own.

Although he’s the executive director of the family trust and one of Colorado’s most eligible bachelors, Carden Crenshaw prefers getting his hands dirty in town and on his sprawling ranch. Staying busy has given him an excuse not to risk heartbreak, but getting to know the beautiful “museum lady” makes him reconsider. Little does he know, the heat between them will only add fuel to the fire—unless this unlikely couple can prove they’re lovers, not fighters.

Read on for  my thoughts on Should’ve Said No.  No true spoilers, promise.

She should’ve known.  Back when her Aunt Tansy had said in her letter to not mention their relation connection to anyone in Thistle Bend.   Right then, Lindsey should’ve known that this life saving job of putting together a heritage museum in this small town was going to be trouble – big trouble.

But no, she’d been blindsided.  After packing up all her belongings into a U-Haul truck, driving from Washington, D C to this tiny speck on the map of Colorado and settling into a ugly cabin that could use a serious overhaul Lindsey was pretty much stuck with this decision.   She couldn’t go back to a city she knew and loved without a job or a place to live – and she’d already signed the lease on this quaintly dilapidated cottage.  Besides, the over the top handsome guy who was puttering in her new home was simply too hot to walk away from without finding out if the sizzle was felt by both of them.

So, she stayed.  Right smack in the middle of a feud that could easily rival the Hatfields and McCoys and kept her connections in town a secret.  She’d have to stay strictly in the middle of this museum creation, which was disguised as a cover to actually find documents that would prove her aunt’s claims correct.  How she was going to manage that, she had no clue but she’d have to try because any future with Carden depended on how this all played out.

Lindsey had no clue how she was going to keep her sanity or her heart safe in the tiny town of Thistle Bend, Colorado.

I enjoyed Should’ve Said No very much, it is such a fun read.  Now, I’m a sucker for small town romances and series… so this is simply perfect for me.

I can’t say that Carden was exactly honest with Lindsey either at first.  To go from a handsome if grungy handyman to a very rich, very hot member of the opposition’s side of this feud would have thrown any woman.  But his charm makes up for that oversight.  Could he have his own agenda in romancing Lindsey – of course – and she does too.  But when lighthearted flirting and digging for information changes over to real feelings and a romance that could tear a couple apart, that’s where the magic of this story takes over.  No, not pretty sparkles, but honest feelings from two people who never expected it and both are determined to save the romance and somehow deal with the feud at the same time.

There are, of course, twists and turns to get to a satisfying conclusion to this generations old mess.  A town full of interesting characters, history and many people we will meet in this story that probably will show up later in the series to tell their own story.  Overall, I’m looking forward to spending more time in Thistle Bend, and I’m thinking that some people are never really gonna change their spots, but we’ll have to read on to know that.

I wouldn’t hesitate to recommend Should’ve Said No for any reader that enjoys small town romance, a mystery to solve and feuding family members to calm down.  Plus, if you’re addicted to series, it’s always a bonus to get started right away on the first story without having to backtrack later on.

*I received an e-ARC of Should’ve Said No from the publisher and NetGalley in exchange for an honest review. That does not change what I think of this novel.*