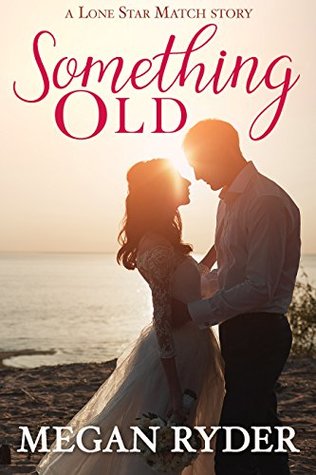 Three Bridesmaids. Three lost loves. One matchmaking bride. With just a week before the wedding, can a bride-to-be reunite her bridesmaids with the ones who got away?

Delaney Winters never expected to see Ethan Van Owen again. He was part of a life she had left far behind… But now, with her best friend’s wedding coming up, it seems like her past has caught up to her. Forced to spend time with her former flame, Delaney’s feelings for him resurface, rekindling the white-hot passion that had always drawn them together.

For five years, Ethan has wondered what went wrong with their relationship. After Delaney broke up with him, Ethan moved to Texas Wine Country to start a new life. But now, he is being pressured to take up the mantle of his family investment business and return to Houston, Ethan must confront his past.

Can Delaney and Ethan bury their past to rekindle the love and passion they once shared?

Titles in the Lone Start Match series include:  Something Old –

It took me a few chapters before I felt any connection to Delaney, and even then it was simply surface.  What drove this story for me was Ethan, his true confusion as to why Delaney broke their engagement quite publicly, why she turned away from her friends just when she’d needed them the most – and why after five years he still loved this woman.  Delaney’s world was destroyed when her father was arrested for a financial scheme that hurt so many people, her friends and their families included.  She had to do damage control, tend to her broken mother, deal with the aftermath of her father’s deception and then his death.  She truly felt that she would only bring Ethan and her friends more pain, drag them into this mess that was her life – so she walked, no ran away from them all.  Her unexplained to those involved “good intentions” only brought her more pain and separation in the end.

Now, she’s maid of honor at her once best friend Caroline’s wedding.  And she’ll have to face her former friends and roommates – and Ethan.  There is definitely world building in this first of the series, and explanations of who, what and why everyone was then and is today.  I would call Something Old a second chance romance in many ways.  Delaney and Ethan aren’t done yet, perhaps they never will be.  But that will come at a cost to emotions, pride and the willingness to forgive each other.  Ethan was a strong, determined man.  Delaney was broken, even if she didn’t acknowledge it and her actions had long reaching consequences.  So not only a second chance romance, but the possibility of building bridges back to friendships that once mattered so much… and hopefully would once more.

We now have a feel for the players in this series, and I’m looking forward for the next story in this series.  I’d recommend this one for Romance lovers who enjoy the twists and turns of rebuilding a life with friends and a lover.