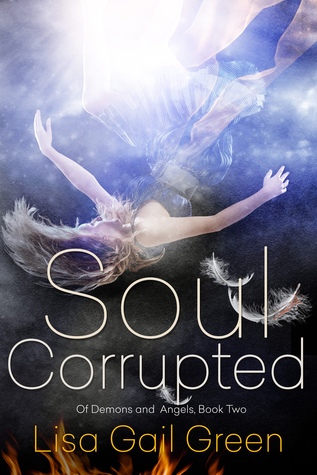 Josh and Grace have made it to Guardian Angel status.  But not everything is going as they expected.  Grace is spending a lot of time watching her family from Heaven, even though that is frowned upon.  She is worried about her brother, Noah, and has no idea of how to turn him from the dangers he is facing should he continue along the path he is heading.

Again, Josh has made a deal with the devil.  (will he never learn)  To save Noah, Josh must give up Grace.  So Heaven is not turning out to be a happy ever after for Grace nor Josh.

There are two young possibilities for the Antichrist in this story.  And events are heating up as it seems the end is fast approaching.

Soul Corrupted is told from several points of view.  For me, this helped a lot in understanding what was happening beyond the view of some characters.  It also made some decisions and actions make more sense.  Knowing how and why Keira became what she is slightly changed my reactions to her.  She’s still a Demon, there is no doubt about that but seeing why, changed hatred to strong dislike.

The ending is a cliffhanger, as I would expect.  I’m looking forward to the conclusion to this trilogy.  And the revealing of who the Antichrist truly is, and the battle that is certain to come.

I enjoyed Soul Corrupted and would recommend it for readers who enjoy Young Adult Fantasy.  Really, most of what you need to decide if this is a story that you would enjoy is in the book description, to say much more would be giving away spoilers.

*I received an e-ARC of Soul Corrupted from the publisher and NetGalley in exchange for an honest review. That does not change what I think of this novel.*

Upon release this novel is available for the Kindle