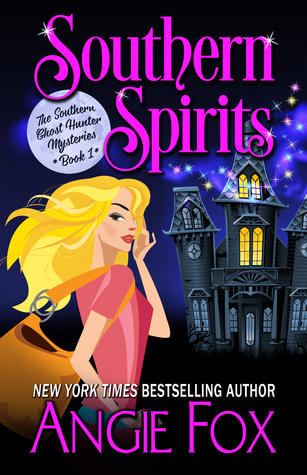 This story has all the earmarks of a great ongoing series.  Smart Southern Lady.   Old South homes, most if not all haunted.  Ghosts, in all forms.  Handsome Southern Gentleman who doesn’t always act like it.  And a juicy small town Scandal.  Really?  What more could you ask from Angie Fox!

Southern Spirits is the first in what Ms. Fox has mentioned will be at least a five book series.  Hell, yeah. Why am I so excited?  ‘Cos this Southern girl has spunk in spades and the story is just a delightful hoot, full of ghosts, eccentric characters, mystery, a beginning romance,  and a heroine who may not know what she’s doing as a ghost hunter but that will not stop this girl.

Verity’s life is pretty much like her grandmother’s Southern mansion… empty, sad and soon out of her control.  Verity was all set to marry one of the sons of a prominent family.  Until she discovered him trying to grope her sister and found out about his cheating.  She stood him up at the altar when he wouldn’t (or maybe his mother wouldn’t) accept that their engagement was done.  Unfortunately for Verity her ex was a lawyer with a mother out for blood – she was sued for the extravagant costs of the wedding that never was.  And now she was standing in the home she’d inherited from her grandmother looking around at the empty rooms and holes in the ceiling where the beautiful chandeliers had once hung knowing that tomorrow she’d have to sell her home.  All because of one vindictive family.  Class act.

One of the few items that hadn’t sold was a truly butt-ugly vase with decades of dust in the bottom of it.  Verity had taken it outside to dump the dirt in her garden thinking at least the roses could benefit from the ancient soil and hosed it out.  Clipping a rose and adding some water, she placed the vase on the mantel thinking at least it would show off the beauty of the fireplace.

What Verity didn’t know was that instead of a vase – she’s placed an urn on the mantel.  And the owner of that urn was not pleased to find himself grounded to Verity.

So begins Verity’s fall into the world of ghosts and things that go bump in the night.

Southern Spirits was such fun to read, really to get lost in for a time.  Frankie is Verity’s new almost constant ghost companion.  A gangster with a wicked sense of humor, Frankie pretty much stole the scenes he was in.  And together they set out of find the money Verity needs to save her home.

Her sleazy ex’s brother, Ellis is a police officer in town, and he doesn’t think much of Verity since he only has one side of the family story.  But since he may have need of her particular talents at a property he and his deceased father were rebuilding, he’s willing to put the past aside (for the most part).  What Verity and Frankie discover at the abandoned ghost town is far more than one destructive ghost.  There is a mystery here and in order to stop the acts of violence in Ellis’ property, they are going to have to solve a very old mystery and put some ghosts to rest.

Ellis and Verity have a budding romance in this first story.  Groundwork is being laid for future adventures, and that’s perfect as the slow growing attraction fits so well within this story.  The mystery is involved and I did not pick out the culprit until the reveal.  Actually since I was reading on my Kindle I didn’t realize I was so close to the ending of this story – that’s how deep this delightful story pulled me in.

If you love quirky characters, if ghost stories send a tingle down your spine and if you love a well told tale with humor, romance and a mystery to solve then you are in for a treat with Southern Spirits.  I would highly recommend getting in on this series from the start.  It looks like a winner for everyone.

Southern Spirits is available in paperback and for the Kindle

« A Slightly Different Line Up
A Ghostly Gift by Angie Fox »