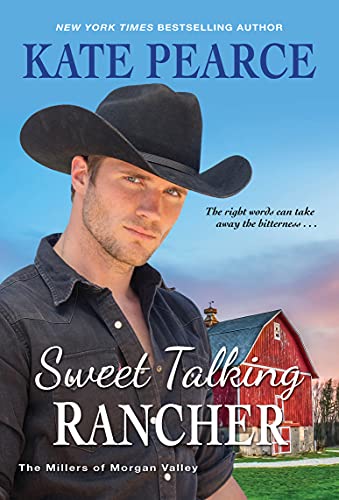 Everyone in rancher Danny Miller’s life wants to know how he feels about his teenage flame returning to Morgan Valley. Danny wishes he knew. After the disastrous ending of their relationship and Faith’s choice to leave town all those years ago, Danny’s rebuilt his life without her. But he’s about to have a very practical reason for needing her in it again—despite the very impractical desire she inspires once he lays eyes on her . . .

Faith McDonald hadn’t planned on returning home, but with her dad retiring, her help is needed at the family veterinary practice. She’s hoping that by now, folks have forgotten what happened between her and Danny—even if the two of them never can. With a mystery infection decimating the Miller cattle, she and Danny soon find themselves on the same side for the first time in forever. There was a lot of trouble in their past, but the good parts never really flamed out, including their intense attraction. And their shared determination to cure the cattle might just lead them to a healing of their own—and a whole new all-grown-up future . . .

Sweet Talking Rancher is the fifth title in The Millers of Morgan Valley series, which is a spin-off of the Morgan Ranch series.  Do you have to have read all of those earlier books to enjoy this one?  No, of course not.  But I would recommend each and every one of them for they all are interesting, engaging, fun, and sexy romances that captured my heart and I believe if you love Modern Western Romance then you’d be captured as well.

Although I liked Sweet Talking Rancher it wasn’t my favorite of the series by a long shot.  Faith and Danny’s back story is one that will break anyone’s heart.  Choices were made, some unwillingly it felt like, and the pain that hovers over this couple to this day, seventeen years later, can still be strongly felt.  I’m not going to go into details of that back story because I think it’s something readers need to experience firsthand, not in a review.  Mistakes were made, hearts were broken, and lives changed… and they each moved on in their own ways, even if the past is still there to haunt them.

The main focus of their story is the mysterious disease that is running rampant through the cattle on the ranch, and on neighboring ones as well.  I think I learned far more about cow poop than I’ll ever need to know in this one.  And that focus took the spotlight away from the romance, in my opinion.  Parent’s interference in any romance, at any age, annoys me to no end.  Faith’s parents really got on my last nerve at one point in this story.  In the end, Faith and Danny followed their own hearts into a second chance future together… but it was a rough road to get to that point.

The writing is engaging, as all of Kate Pearce’s romances are, the plot flowed easily, but this time around I simply could not fall for the couple and felt that other factors pushed their second chance romance into second place in Sweet Talking Rancher.  Yet, that’s just one reader’s opinion and you may find a far different story than I did.  It’s a good book, simply not my favorite of the series.