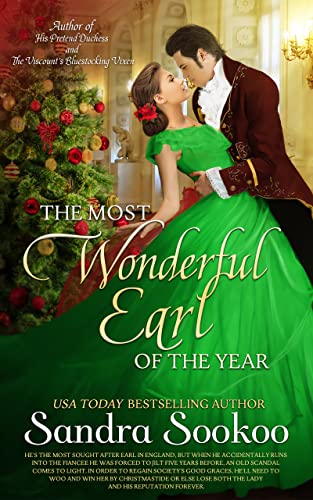 Love at Christmastide is wonderful… if the couple in question believes in the magic.

Alistair Forsythe, the 12th Earl of Reardon, is the most sought-after man in the ton this Christmastide season. Handsome, of good character, and possessing a large fortune, he finally intends to do his duty to his title after being in India for years. In the market for a wife, he can now easily have his pick of any woman, yet none of them have snared his interest—not since Carole—but she is beyond his reach.

Miss Carole Hazelton doesn’t give two farthings about a man’s position within the ton or his looks. In fact, she’s not thought about the beau monde since that horribly embarrassing day five years ago when Alistair left her standing alone at the altar. Now making her living as a governess, she’s both dismayed and furious to discover the neighbor who’s returned to the townhouse next door is the man who’d jilted her—Alistair.

As that old scandal recirculates, it throws their reputations into question. To repair the damage, the earl and Carole must practice forgiveness. While she’s not quick to forget, he’s not above employing charm and mistletoe to his advantage or drawing on their past romance, but when the feelings they both thought long dead come rushing back, that love just might ruin them both… or provide a second chance they never knew they needed.

END_OF_DOCUMENT_TOKEN_TO_BE_REPLACED 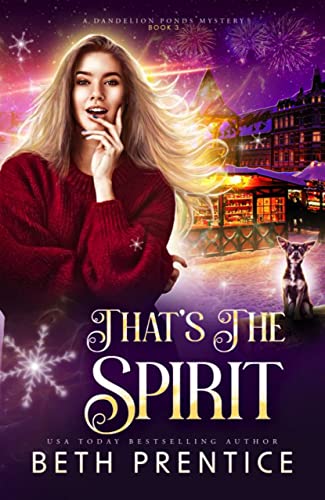 It’s New Year’s Eve in Dandelion Ponds and Daisy still hasn’t woken up. Yet that hasn’t stopped her from solving two murders, with the help of her newfound friends, her fiancé, and Charlie, the man who’s stolen her heart.

But when her fiancé Logan turns up dead and Charlie is the number one suspect, Daisy must rally her friends to prove his innocence. It doesn’t take long for them to realize a more sinister force is behind it all, and Daisy holds all the information they need to solve the case.

If only she could wake up and remember it.

END_OF_DOCUMENT_TOKEN_TO_BE_REPLACED

How many Santas does it take to commit a murder?

Daisy Montgomery remains stuck somewhere between life and death, leaving her spirit roaming Dandelion Ponds. But when Mrs. Baker, Daisy’s neighbor, and faux grandmother, turns up in the morgue screaming she was murdered by Santa, Daisy is determined to find the killer.

Convincing super-sexy Charlie O’Sullivan to help her find out whodunit isn’t difficult. But finding the murderer amongst the town’s several resident Saint Nicks is!

With the annual Santa contest about to bring even more wannabe Kris Kringles into Dandelion Ponds, time is running out to find the killer. And when the murderer catches onto the investigation, it’s Charlie’s life on the line. If they can’t catch this bad Santa in time, then Charlie could be the next victim of ho-ho-homicide.

END_OF_DOCUMENT_TOKEN_TO_BE_REPLACED

What do you do when you wake up dead?

Daisy Montgomery was living her best life until she was attacked by a force so powerful that it separated her body from her soul. Now neither living nor dead, her spirit form lacks ghostly abilities like walking through walls, and she can’t communicate with anyone. Except one.

Luckily her connection to her little dog, Alfie, led her to super sexy Charlie O’Sullivan, a man who can not only see her spirit and open doors for her but someone who makes her question everything she thought she knew about her life, love, and almost death.

The more she, Charlie, and his merry band of spirit helpers uncover, the longer her suspect list grows. But when someone else she knows dies, Daisy must use her newfound knowledge to discover who the killer is before they strike again. If she can’t, not only are her loved ones at risk but the killer could come back to finish the job they started the night of her attack. And Daisy’s not ready to rest in peace.