Tag: Hit Me with Your Best Scot 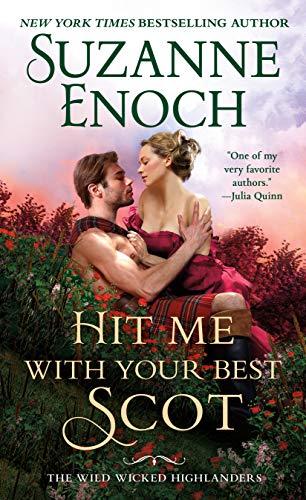 The MacTaggert brothers have one task: Find English brides or lose their land!

Coll MacTaggert, Viscount Glendarril, is a big, brawny Highlander who doesn’t like being told what to do—not even by his exasperated English mother who is determined to see her eldest son wedded and bedded. However, when he comes to the rescue of an irresistibly beautiful woman, Coll discovers that he may have found his perfect match…

The challenge isn’t that Persephone Jones is famous, wealthy, independent, and smarter than anyone he knows. The problem is that she is not interested in marrying any man—especially not a hot-headed Scot—even if he is the only man who seems to understand who she really is even when she’s not sure herself. When Coll learns that Persephone is actually a lady-in-hiding and someone is willing to kill her for what she stands to inherit…Well, Coll has never been one to turn down a fight. When hearts are involved, nothing comes between a Highlander and his lady.