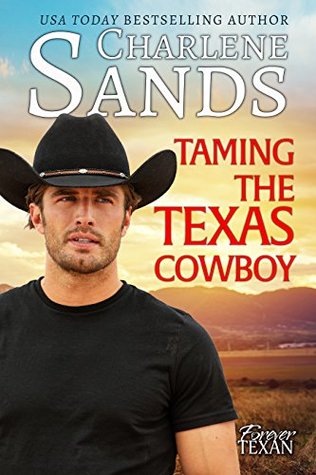 Maddie has spent the last year living and working on 2 Hope Ranch after a fire destroyed her veterinarian business and her apartment.  A year where she’s rebuilt, come to terms with the loss and spent the time along side of a sexy cowboy she wishes would return her affection.  Trey runs warm and cold, there’s a spark there, she knows it but he won’t act on it.  At this point she’s given up any hope for them at all – then he went and kissed her.  Now what was she to do?

Trey knew a year ago that offering sanctuary to Maddie was probably not a great idea, but when disaster hits you do the right thing.  Oh, he’s aware of the chemistry between them, and her draw is not easy to resist.  But Trey is convinced that he’s cursed with it comes to women.  Okay, maybe he’s had some bad luck, but he’ll never know until he stops meandering around the attraction.  So he kissed her – what in the world has he let loose now?

Taming The Texas Cowboy is a fun, charming look at a man who is strong in some ways and afraid in others.  When push comes to shove he has to admit that Maddie could mean something important to him.  He simply has to get past that idea of cursed, and changed it around into blessed.  Maddie is about to give up on this man who could be everything she’s dreamed of.  Now she has to decide if she’s the one to show him how good real love can be.  There is definite chemistry between Trey and Maddie.  I enjoyed their banter and understood Maddie’s frustration with this man.  Sometimes all it takes to turn bad luck around is the right woman, something that Trey has to learn.

Looking for a fun, charming and sexy story?  Love to be in on the beginning of an exciting new series?  Then you’ll want to pick up Taming the Texas Cowboy.  Maddie and Trey’s story is one that any Romance reader would enjoy. Cowboys, animals and love always a winning combination.