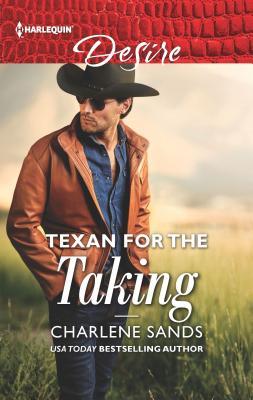 TEXAN FOR THE TAKING begins Charlene Sands’ Boone Brothers of Texas with a story of enemies who might have once been lovers if only things were different who get a second chance to make it right – for them, no one else, just them.

The chemistry between Drea and Mason leaps off of the page.  It’s obvious that there is more than hatred in Drea’s eyes when she faces off against Mason again.  And it’s equally obvious that Mason isn’t going to hold back this time.  He knows what he wants, and if that means going the roundabout way to get it, he can do that.  But Drea belongs with him and he’ll prove that to her even though he knows full well that’s not going to be easy.

There was a time when Drea believed Mason hung the stars and the moon, back before he crushed her dreams and broke her heart.  Now she’d just like to ship him off on a oneway trip to the moon.  But she needs to work with him, that doesn’t mean she has to fall in love with the stubborn cowboy again.  Tell that to her heart though, because that stubborn emotion-filled organ isn’t listening to her right now.

Mason and Drea’s story starts off the series in a way that will keep me coming back for the rest of the overall story.  There are secrets being revealed, not everything is exactly as Drea believed it to be.  Little bits and pieces about secondary characters will bring me back to find out more, and maybe to watch them tumble into love themselves.  I don’t need to know everything when I start a series, but I need enough to engage my curiosity, and that is definitely engaged with TEXAN FOR THE TAKING.

Sizzling in the right places, angst but not too much, emotions running high from intense dislike to deeply felt love.  This one is a smooth introduction to the Boone brothers and the ladies who will eventually settle these boys down.  I was easily captured by the overall story and will be diving into the rest of this series with pleasure.

I own a Kindle Edition of TEXAN FOR THE TAKING.