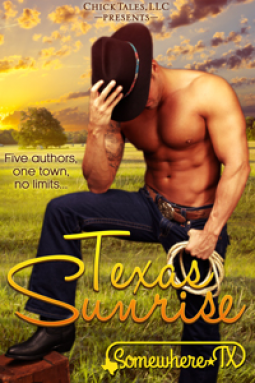 Welcome to Somewhere, TX
Five Authors, One Town, No Limits…

She’s off-limits and he’s off his game, but together, they could make perfect harmony…

She can heal his broken ribs, but it will take more than medicine to repair her reputation…Things are about to get a whole lot hotter in Texas.

When two people fall for the same cupcake, more than tempers flare…

A chance he’d never thought he’d have comes at a price he never wanted her to pay.

The Jackalope café wasn’t  known for romance, but when Max and Delia met, the rules disappeared. Could a one-night-only affair be enough?

Read on for my thoughts on Texas Sunrise.  No true spoilers, promise.

I’ve always been a California Dreamin’ kinda girl, but let me confess – I would head for The Lone State in a heartbeat if any one of these cowboys were at the border.  Welcome to Somewhere, Texas where just about anything can happen…and does.  This is a “boxed set” of five novella set in Somewhere, TX.  Each one is a delight to read, each one is just a bit (or a lot) different from the one before – and all are well worth the reading time.  So let’s get started.

DJ (Daniele) & Brent were such a great couple.  Both stubborn as mules.  Brent had left Somewhere, TX to follow his dream of music.  Now he’s at the top of the Country charts, a true Rock Star… and maybe a bit of that’s gone to his head.  Right now he’s back home, trying to find his muse, his ability to write the songs that made him famous once again.  Asking his best friend Derrick to let him stay on the ranch seemed like a good idea at the time.  Even if it would put him right in DJ’s path.

DJ had loved Brent on many levels throughout her life.  As her big brother’s best friend, he was always around, so her crush grew.  On Brent’s last night in town, before he headed out for the bright lights and promises of Nashville they shared one kiss.  One kiss that changed everything for DJ.  And he never came back, not even when she needed him the absolute most, at her parents’ deaths.  And here he is again – trying to pick her up in the local bar like some bimbo.  Typical Brent.

I loved this couple.  They had a lot of past to get through to their happy ending.  An amazing story.

2.  Saddle Up by Jodi Vaughn

Derrick (DJ’s brother from The Cowboy Rock Star) & Emily were such a sweet couple.  Derrick fell of his horse and got kicked.. that night at the lake drinking  with Brent.  Seems boys will be boys.  Dj and Brent found him the next morning and took him straight to the ER.

Emily has recently arrived in Somewhere, TX.  She’s looking for a fresh start after her jerk of a boyfriend stole prescription pads from the doctors where Emily had worked.  She did nothing wrong, but gossip spreads faster than the truth.  She takes care of Derrick in the ER and there is an attraction between them.  While still on duty she learns some nasty news from her past with the boyfriend that sends her reeling.  He finds out that she need financial help plus she’s just been kicked out of her apartment.  So being the nice guy that he is, Derrick offered to let Emily stay at the ranch’s bunkhouse til she got sorted out.

A very sweet couple.  Some meddling by a she witch of a rich bitch but aside from that – just a fun, sweet cowboy romance.  Really enjoyed it.

Claire & Aiden – Their love story began with a tragedy years ago.  Aiden had been married to Claire’s older sister Jane, who died in a fire at her home.  Her death was suspicious, and Aiden, who is a firefighter, was always the prime suspect.  Who better to know how to set a fire and get away with it than a man who fights fires for a living.  At the time, there wasn’t enough solid evidence to convict Aiden in the law – but oh, how easy it was for the townsfolk and Jane’s family to be convinced of his guilt all these years.

Ten years later, Claire has returned to Somewhere, TX.  She and a partner are starting a business and she needs an amazing cake or cupcake from Meg’s Bakery to cinch the deal.  Too bad that another person is also after that cupcake – Aiden, who is sitting in on the tasting for his sister.  Claire has loved Aiden for years.  Yes, he was her sister’s husband.  No, he never really knew how Claire felt.  But love was love no matter if it isn’t acknowledged.

As Claire and Aiden sit in a diner catching up, the local sheriff enters, and arrests Aiden for the murder of Jane.  Claire will do anything to free Aiden and put the true killer behind bars.

This was an extremely intense story.  The couple will fall in love along the way to solving this mystery.  A very good read.  Lots of suspects, but I didn’t see the ending coming.

4.  To Save  A Mate by Krystal Shannon

College student Kara has had the worst day of her life.  She discovered her boyfriend cheating on her with a sorority sister – and she has learned of her parents deaths while they were away on  vacation.  Kara is overcome with such grief, she is out running close to midnight when she stumbles and falls into the path of an oncoming truck.  While she hadn’t planned on dying to escape this unbearable pain, death would be welcomed.

Luke has loved Kara for years.  He’s know about her cheating boyfriend for a long time and was just waiting in the wings for Kara to discover what a scum bastard he really was.  While racing to his family’s wooded property before the full moon rose, Luke sees something off to the side of the road dash in front of his truck.  He hears the thud of a body being run over.

As he holds Kara’s dying body in his arms, Luke makes a decision.  One he knew he’d always make when it came to Kara, he just didn’t expect to do it under this type of circumstance.  Luke is a werewolf.  Kara is his fated mate.  He performs the mate bonding to save Kara’s life and prays that it won’t be the worst mistake of his life.

This novel was so enjoyable.  And is also the first in another series within Somewhere, TX.  The story tells of Kara’s adjustment to Luke, her grief and falling in love again – for life.  I really loved their story.

Max & Delia.  This is a truly sexy, and sex filled novel.  If you’re not into even a bit of dominance and submission, then this one might not be for you.  I enjoyed it, but this area of sex or sexual entertainment isn’t for everyone.

Max has a secret.  Just a bit of one but his enjoyment of that secret got him fired from one college when he entertained the wrong woman.  Now that encounter is biting him in the ass and the paycheck.  He’s moved far from the lights of New York City to end up in Somewhere, TX – but he has to start over somewhere, and it is a job.

Delia is a college student at the college where Max will start teaching.  She first comes across Max when he slipped into a booth for diner where she worked.  The attraction started there.

Throughout this novel we discover Delia being slowly introduced into the world of bondage, dominance and more.  Her trust and love for Max will grow through this time.  Delia also has a stalker.  There are touches of magic scattered about.  You’d have to look for them, or be a reader of the paranormal to catch a word here, a feeling there, but I saw them and smiled as there is a touch of fae in Delia’s family tree.

I enjoyed this one.  I found it to be not too over the top.  I read erotica so nothing surprises me, but if you are new to the genre… well, only you can decide what you want to read.  For me, I completely enjoyed their story.

*I received an e-ARC of Texas Sunrise Boxed 1-5 Set from the publisher and NetGalley in exchange for an honest review. That does not change what I think of this novel.*
Texas Sunrise is available for the Kindle

« Waiting on Wednesday #10
Review: Beauty and the Rake by Erica Monroe »