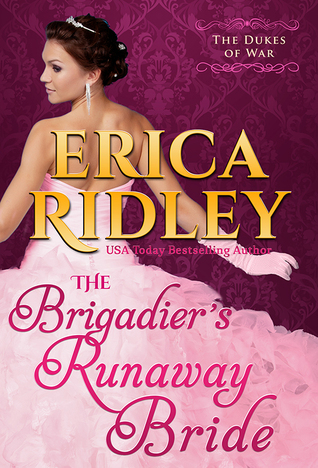 Miss Sarah Fairfax is having a wretched year. Her intended perished at war. His child is in her belly. To secure her future, she resigns herself to a loveless marriage. Just as she’s about to say “I do,” her fiancée returns from the grave to crash the wedding… but he’s no longer the charming, carefree man she remembers.

After being left for dead on the battlefield, Brigadier Edmund Blackpool is scarred inside and out. He fights his way home only to discover his intended before the altar with his best friend. He’ll be the one to marry her, no matter what she wants! But when his new bride disappears with his child, he must reopen his wounds to win the most important battle of his life.

Read on for my thoughts on The Brigadier’s Runaway Bride.  No true spoilers, promise.

Today was Sarah’s wedding day.  She and Edmund had been betrothed before he left to serve their country in battle.  They had had an amazing final night together where her love had shown her the heights of physical joy.  Now eight months later she was swollen with child as she stood to take her marriage vows.  Only the groom wasn’t Edmund.

Edmund was presumed dead on the battlefield.  There was no way that he could have possibly recovered from his wounds, and word was sent back to his betrothed that her love was gone.  In an effort to salvage her reputation, Sarah is about to enter into a loveless marriage.  She could care less for herself, without Edmund she had no desire to love another man, but for their unborn child she would say her vows.

Only Edmund wasn’t dead… as the church doors crashed open at almost the end of the marriage ceremony, Edmund stared at his betrothed at the altar with another man.

The Brigadier’s Runaway Bride was an enjoyable addition to the Dukes of War series.  Edmund had fought his way back to Sarah with physical and mental wounds.  He was not the same man she had loved before he went away.  Edmund was experiencing what today would be called PTSD.  Then, there was little treatment for that particular wounding of war except a soldier’s family loving and caring to bring him some sense of normalcy.

Edmund had changed, Sarah was changing with her pregnancy and soon to come birth of twins.  Neither one was the person they were on the night when Edmund left.  Running away wasn’t the smartest thing Sarah ever did, because in the end running only prolongs the problem.  Sarah was insecure about the changes to her body and the exhaustion of a new mother.  Edmund loved her and wanted a normal marriage but both were wounded in their own ways.

This couple must be willing to fight for the love they had and to accept the lives that they now lived.  Love wasn’t the problem, it was the lack of talking to each other about their fears and hidden insecurities.  A love worth having is a love worth fighting for.  That is a lesson they each needed to learn.

I enjoyed The Brigadier’s Runaway Bride.  It was good to see previous couples again and wonder at what will happen in the next story.

*I received an e-ARC of The Brigadier’s Runaway Bride from the publisher and NetGalley in exchange for an honest review. That does not change what I think of this novel.*