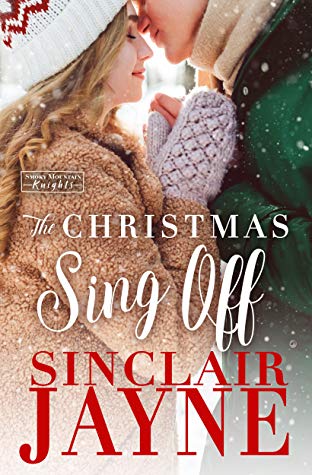 He’s closed the door on music and Christmas. Can her voice be the key?

At the height of his fame, pop star Shepard Lake walked away. No one knows why, though rumors are rife. Creatively blocked, he seeks inspiration and a fresh start for his life and career by returning to his Tennessee roots. He finds far more than he bargained for when he is drafted to help with a small-town Christmas festival.

Tyler Knight lives and breathes music, but a career as a songwriter remains a distant dream. When her sister asks her to return to their hometown, Sweet Tea, Tennessee, and help her with the town’s Christmas Carol Sing Off, Tyler is thrilled to have a change of scenery and a chance to start over after a series of disappointments. Then she is paired with the infamous Shepard Lake who’s too everything – handsome, confident, talented and way out of her league.

But is he? Will this Christmas be the one where Tyler gathers her courage to pursue her dreams of music and love?

I had wondered what happened with the Smokey Mountain Knights series – and now I have an answer.  The moment Tyler’s sister Sutter and her husband Dawson were mentioned I knew where this story was originating from and it felt like coming home.  See?  Some stories, some beginnings of series do stick in a reader’s memory.

THE CHRISTMAS SING OFF is such a poignant, realistic story that it will grab hold of your emotions from the beginning and still hold onto them even after the final page is turned.  There is a deep-seated, underlying sadness to Shepard and Tyler’s story.  Two people who meet as if by chance will have such an impact on each other’s lives it almost feels like fate.

Watching Shepard come back to life again, to begin to hear his long-silenced music was such a poignant feeling.  I could feel his despair, his fears that he’d never write let alone perform his own music again.  Betrayal, lies, deceit lead to his walking away from everything he once had to now walk the trails of the Smokey Mountains outside of Sweet Tea, Tennessee about to come face to face with his future.  There are times as a reader that I know something big is happening to a character, yet this time I felt it as it happened and that was a powerful experience.

Tyler has always felt that she lived in the shadow of her big sister, Sutter.  With such a strong personality, stubbornness galore and the belief that she is always right it’s hard to stop Sutter when she’s on a roll or when she believes something.  She had her little sister put into a neat box where Tyler didn’t really belong but she’s too shy, too uncertain of her own talents that she doesn’t fight for more – until Shepard.  Together with Shepard, she’s found something and for that, she will fight her own fears, try to stand up for herself and take risks she’s terrified to take as long as this man is in the picture with her.  She’s growing into the woman she can be on her own and with the man she’s come to love.  She’s doing it scared, she’s going to stumble, make mistakes but at the core, Shepard and Tyler bring something to each other that (as silly as it might sound) completes them, gives them the courage to do what they never thought possible.  This is not only a couple but a team in the making each with their own voice but stronger together.

I fell in love with Shepard, Tyler, Sweet Tea, Tennesse and I can guarantee that THE CHRISTMAS SING OFF will be on my annual Christmas reading for my own pleasure list from now on.  Yes, I loved this one and would not hesitate one second in recommending it to any Romance reader who loves strong characters, a story to touch your heart and being able to hold hope in your hands.