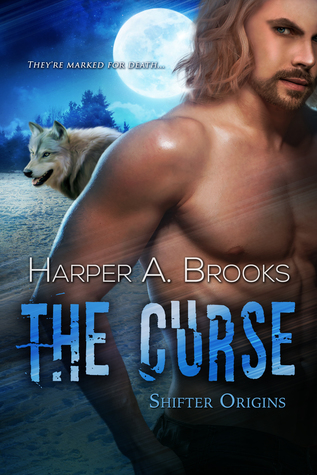 For wolf-shifters like Astrid marked by the curse, time is running out. If she doesn’t find her soul’s mate before her twenty-fifth Blue Moon rises, she will die. And with only three weeks left, things aren’t looking good for her. True love just doesn’t fall out of the sky.

Lone wolf Erec is determined to stop a crazed killer from harming anyone else. Even if it means helping a rival pack. But he never expected to feel such a pull for the alpha’s beautiful daughter, Astrid. He doesn’t have time for distractions if he wants to find a killer before his final Blue Moon rises.

Danger looms, and the swirling patterns on their skin mark them for death, but Astrid and Erec are willing to do whatever it takes to save the pack, even if they die trying.

Titles in the Shifter Origins series include:  The Hunt – The Curse –

Every author’s Shifter world is unique and adds a bit more to the lore of Shifter Romance.  In the Shifter Origins world if a person has not found their fated mate by their twenty-fifth blue moon then they will die.  There are no exceptions, and they will know when they are reaching that point not only by their own intelligence but by the markings that will begin to appear on their bodies.  Astrid and Erec are both approaching the end -at this point in their lives family, pack are close to outweighing their own needs.  Of course, no one wants to die but when there is no more hope you do what you can for family or pack, if possible.   Astrid and Erec face their final blue moon by hunting down a rogue wolf who is destroying neighboring packs, killing alphas and torturing those who will not join the rogue’s pack.  They didn’t realize that the fight for survival on several levels would lead them to their own fated mate or a happier ending.

While The Curse was eventually an intense, action driven romance, at first it was very difficult for me to connect to Astrid.  Her actions  and attitude were out of line with what I expected from a woman facing her twenty-fifth blue moon.  She often acted without thought like a petulant teenager.  If you feel this way about Astrid also in the beginning of The Curse I would encourage you to hang in there with her for she does turn into quite a strong and determined character.

For me, The Curse turned into an intense, interesting, action packed story that did not depend on the main characters finally finding and consummating their connection but more about family loyalty, finding out exactly what you are capable of and discovering that you are worth far more to yourself and others than you ever imagined.  I would recommend this story and the earlier one that begins this series, The Hunt.  You will find a very unique world with its own rules but a fascinating one as well.