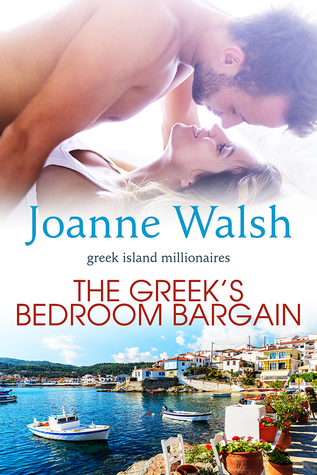 Infuriating, arrogant, demanding. And disturbingly sexy. Those were the first thoughts Frankie had about Greek millionaire and volunteer firefighter Nik Kontarinis, but she was not going to fall prey to his seduction plans. She was on the island of Kathos to lick her wounds and figure out her next steps, not to become another notch on Nik’s bedpost.

A villa restoration project presents the perfect opportunity for Frankie to reboot her business and her life. There is only one problem–she needs a business partner. When Nik offers her an opportunity too good to pass up, Frankie is tempted to accept. Except that Nik has set his terms and there are definitely strings attached.

Will Frankie give in to temptation and play?

Looking for a sexy read?  A summer’s reading delight for the beach or the patio?  Then THE GREEK’S BEDROOM BARGAIN fits that need perfectly.

Frankie’s put her past and her ex behind her – for the most part.  The ugly memories still surface now and then, but she’s headed to Greece to help a family friend and get her life back together on her terms.  She hadn’t counted on an adorable pup or a sexy as sin firefighter who just happens to be a millionaire as well.  Sure the sparks fly but she’s not interested in his terms since Nik has a very real reputation as a player.  Unknown to Frankie is that Nik pretty much got hit with the thunderbolt when they met.  He’s tired of his no relationship lifestyle and Frankie is the woman he could see himself with for a lifetime.  Now he just has to convince her of that.  And when the perfect opportunity comes along to not only help her out but get oh so much closer well, he’s no fool – usually.

THE GREEK’S BEDROOM BARGAIN is full of fire hot sparks between Frankie and Nik, misunderstandings, a few arguments that no one wins, beautiful scenery and an agreement that just might lead to a happy ever after.  I had fun with this one, and I know I’ll always get a sexy, entertaining story with amazing travel beauty included in any story by Joanne Walsh.  I liked Frankie and Nik, their story has rough moments and sexy ones as well.  It’s a perfect summer (or any escape time) read plus there are more stories in this series to come as Nik’s brothers meet their own match or lifemate.

« Steel Resolve by B.J. Daniels
One Night to Remember by Erica Ridley »